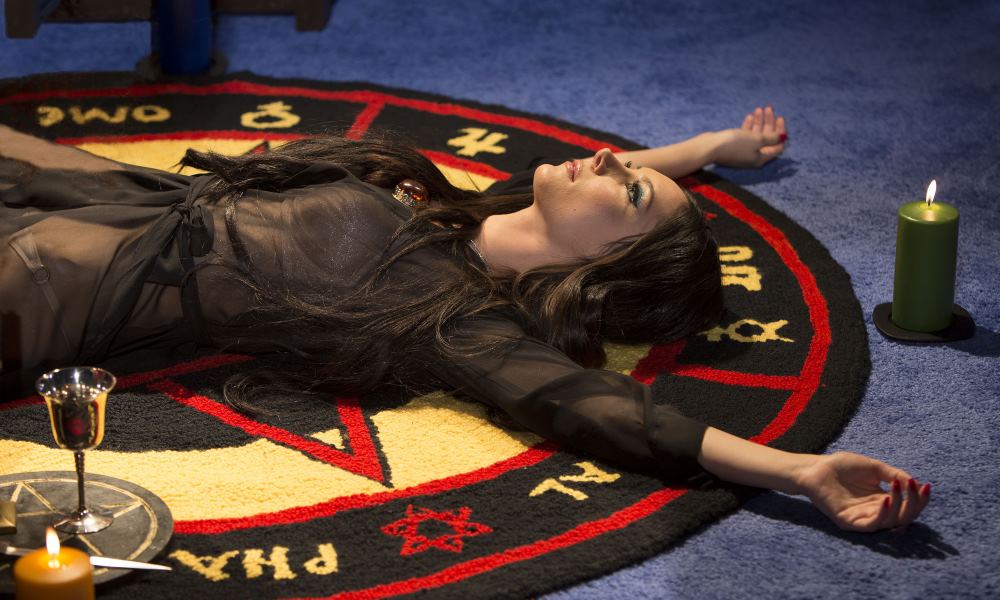 If the ongoing franchise juggernaut of J.K. Rowling’s magical fantasy is anything to go by, the world just can’t get enough of wizards. But who, you might ask, is looking out for the witches? Well, Anna Biller certainly is – writer and director of the deranged, kaleidoscopic comic horror The Love Witch. There’s no white-washing of the radical female sexuality of witchcraft to be found in this feature, which tackles feminist tropes and chauvinist insecurity in a remarkable onslaught of campy satire and flashing cartoon colour.

Elaine (Samantha Robinson) is a confident young witch, just coming to terms with a break-up which maybe – just maybe – she helped to expedite by poisoning her husband. This is communicated within the film’s opening minutes thanks to a series of demented flashbacks: very much setting the tone for what is to come. She leaves San Francisco, travelling to a small town where she can stay with her friend and fellow witch Barbara (Jennifer Ingrum). Elaine is hungry for love and looking to meet a real man: one who is sensitive but strong, caring but still authoritative.

Elaine believes that a man can be made to love if his sexual desires are welcomed, and so – armed with her hallucinogenic love potions – she sets out to snag herself a keeper. What follows is a series of encounters with masculine stereotypes: Wayne (Jeffrey Vincent Parise), the university lecturer who laments that sexy women can’t do it for him intellectually and vice versa, Richard (Robert Seeley), the married man who wants to have his cake and eat it, and Griff (Gian Keys) the strong macho type who is emotionally distant to the point of sociopathy.

At times, the film comes across as a straightforward exercise in exposing masculine hypocrisy, at other times, it seems to be mocking female gender roles too. Because the script is intentionally schlocky, and the acting intentionally wooden and exaggerated, the whole enterprise is locked into an inscrutability that is both hugely entertaining and – occasionally – quite annoying. The Love Witch resembles, more than anything else, a subversive comic book come to life: it’s brash and bright, with a plot that’s improbable in the extreme. The madness this entails is laudable, but you may feel – after it’s all over – that a more focused or coherent approach to its scatter-gun oddity would have made it that little bit more enjoyable.