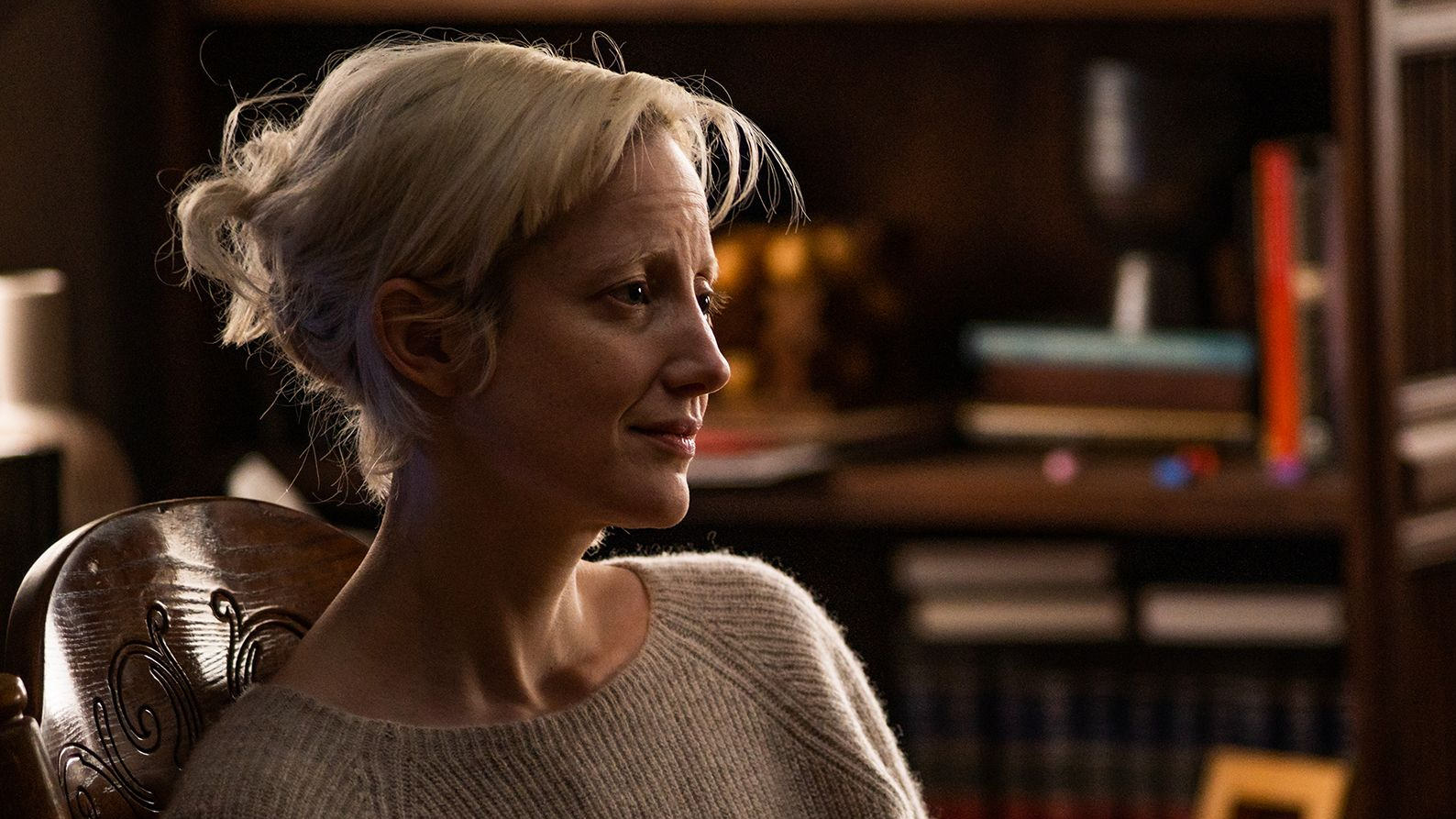 His first film since his debut Antiviral back in 2012, writer and director Brandon Cronenberg brings us a delirious, disorienting psycho-science fiction. An uneasy and messy union of genre and arthouse, Possessor disturbs, thrills and eludes us in equal measure.

Opening on a brief, razor-sharp montage of needles, wounds and bodily penetration, we’re jolted into relatively stable reality, as we watch Holly (Gabrielle Graham) – the woman whom we just witnessed stabbing her own head with a needle – make her way to a swanky party. Time and space are out of joint – a flowing tap runs backwards and in staccato – are we witnessing reality or a buggy simulation?

Things certainly feel pretty real when she violently stabs to death one of the other party goers, before being gunned down by the police. The answer, evidently, is somewhere in between: Holly was real – a hapless host hijacked by Tasya Vos (Andrea Riseborough), manipulating her like an avatar in a virtual reality game. We learn that Tasya works for a shady assassination company, apparently specialising in corporate hits for rival companies.

The premise will be familiar both to genre fans and mainstream audiences. The Matrix, Inception and to a lesser extent, the Blade Runner films have obvious narrative similarities, but the legendary R.W. Fassbinder’s brief dalliance with sci fi – World on a Wire – is a far closer approximation of the aesthetic and overall tone of Possessor. Josef Rusnak’s largely-forgotten The Thirteenth Floor has some thematic crossover, too, but it’s Brandon’s dad’s eXistenZ that is surely the most important – and potent – ingredient in Cronenburg Jr.’s cinematic broth. There’s a touch, too, of Persona in there – this film’s title surely being a play on Ingmar Bergman’s film.

It’s a heady mixture of genre and arthouse, and pays dividends. The cold-war greys and brutalist surfaces of the interior locations are at constant odds with their fleshy occupants, while Cronenburg’s near-ubiquitous use of shots in close up with long lenses flatten out cavernous space and elicit a subcutaneous sense of paranoia and surveillance.

There is a pleasingly analogue feel to the gadgets and technology that mercifully avoids the off-the-shelf 1980s-ness of so many of Possessor’s contemporaries, aiming instead for sterile grubbiness and alienation. Underneath its sliding textures and evocative themes, this is a film about the fundamental instability of modern identity, brilliantly and often uncomfortably evoked.

It’s hardly an original concept – either in narrative or theme – a criticism borne out in the numerous, explicit sources from which Possessor derives many of its principles. Still, it’s hard to fault the execution and it is certainly easy to see future film historians reading this film through the lens of its historical moment. Indeed, if earlier this year, horror found its voice for the moment in Host, Possessor is undoubtedly its answer in science fiction.