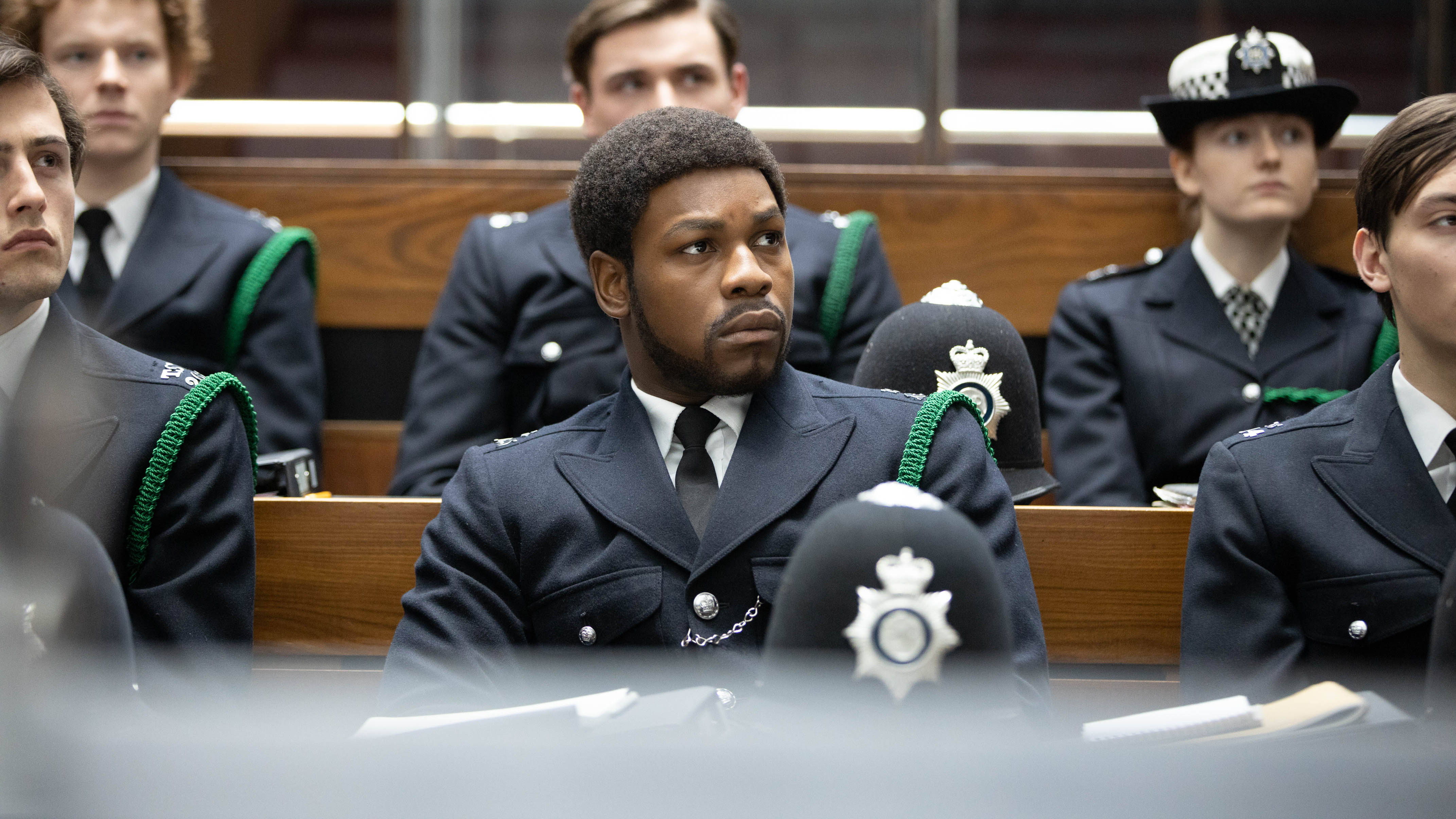 Steve McQueen’s extraordinary five-part series, Small Axe, set in the heart of London’s West Indian community from the 1960s to the 1980s, continues on BBC One with Red, White and Blue, co-scripted with Courttia Newland and starring John Boyega (Star Wars: The Force Awakens). Based on a true story it follows the fortunes of a black British man, Leroy Logan (Boyega) who decides to change career and become a police officer.

Red, White and Blue explores institutional racism and the alienation of black youth in Thatcher’s Britain, as well as celebrating the triumph of hope and the importance of family. It opens with Leroy, an innocent-faced schoolboy, anxiously awaiting the arrival of his father (Steve Toussaint). Ken arrives late and, to his horror, finds his son being questioned by the police under the bitterly resented SUS law, which allows them to stop and search anyone they deem suspicious, and to target black and ethnic minority communities. Ken’s reaction is entirely understandable, but the experience marks Leroy in a different way.

Years later, Leroy has a successful career as a research scientist. After his father is brutally beaten up by racist police officers, he decides to sign up with the metropolitan police in the hope of making a difference; believing that he can change the organisation from the inside. Ironically, Leroy’s successful enrolment in Hendon’s training academy is determined more by a sudden “drive for coloured recruits” than his skills as a scientist. His decision is bitterly resented by Ken but encouraged by his auntie, who works in police liaison and believes Leroy would be a “benefit to the community”.

Hit on all sides, Leroy finds himself sorely tested by the bigotry of his fellow recruits while members of the local black community label him a “traitor. He proves to be a brilliant student – fit, conscientious and highly motivated. Although recognised as “best all-round recruit”, the persistent racism begins to take its toll. His superiors and fellow trainees repeatedly undermine Leroy and, on graduation, he is relegated to street duties. Their xenophobia is brilliantly encapsulated in a fast-paced scene where Leroy confronts and chases a violent criminal through a printing factory and his fellow officers fail to respond to his urgent requests for backup.

Much of Shabier Kirchner’s footage is shot through car windows, giving a palpable sense of being watched. The period is beautifully evoked through music, Sinéad Kidao’s costume design, Hannah Spice’s detailed domestic interiors and verbal references – there’s a wonderful moment when Leroy tells a cousin, “I want to join the force.” His incredulous response is: “What? You’re going to join the Jedi?” A clever signifier of the time as well as a nod to Boyega’s acting career. Red, White and Blue captures a moment in history, before the onslaught of knife crime and gang shootings, but there are already signs of disaffection in the local black communities.

Toussaint and Boyega are particularly impressive and their father-son dynamic is utterly believable. Toussant conveys all the intensity of a proud, embittered father, desperate for his day in court and betrayed by the system, whiles Boyega exudes the optimism and quiet confidence of a man determined to succeed against all odds. McQueen and Newland’s assured script grips from the start and keeps us deeply involved in the characters’ fates. Not to be missed.

Red, White and Blue, the third of the five Small Axe films created by Steve McQueen for BBC One, airs at 9pm on Sunday 29 November.