BFI LFF 2011: ‘Children Who Chase Lost Voices from Deep Below’

Director Makoto Shinkai’s previous effort 5 Centimetres Per Second (2007) is one of the most beautiful animes to ever grace the screen. Its tale of unrequited love told across three stages created a story more emotionally devastating than even the most assured romantic film. Children Who Chase Lost Voices from Deep Below (2011) is a far more conventional anime film, recalling the fantasy and wonder of Studio Ghibli, yet still retains the same artistic flare which marked Shinkai as one of anime’s most promising directors.

Asuna Watase (Hisako Kanemoto) lives a solitary life – her mother works as a nurse in the local hospital and her father died whilst she was still in her infancy. She spends most of her time outdoors, listening to the homemade radio her father left her, whilst enjoying the company of her incredibly intelligent and thoroughly adorable feline companion, Mimi. However, during one fateful excursion after school to the mountains (where she goes to escapes the suffocating isolation of life at home), she encounters a large, sharp toothed creature, resembling an oversized bear. She fears for her life but is dutifully rescued by a brave young man who appears to have superhuman powers.

After making light work of this fierce beast, he introduces himself as Shun (Miyu Irino), a warrior from Agartha – an underground realm where these beasts (known as Quetzalcoatl) guard the entrance to ensure ‘topsiders’ don’t venture in and devastate their peaceful land. Many have tried to enter in search of the magical gate of life and death, a mythical place which resides deep below and which apparently can grant the wishes of whoever discovers it. However, when Shun disappears, Asuna finds her search for this mystical young man leading to Agartha and into an adventure far beyond her wildest dreams. 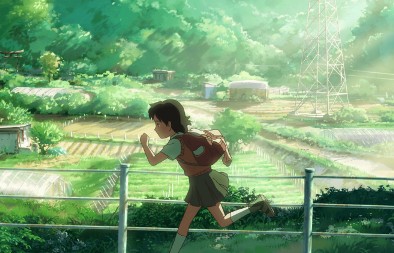 Children Who Chase Lost Voices from Deep Below is a charming, yet thought-provoking film. Retaining the same delicate beauty as his previous work, Shinkai has created a tender and visually sumptuous piece of animation – where any single frame could easily be removed and held-up as an accomplished piece of art. Further heightened by a sublime and enchanting score, Shinkai’s latest is perhaps the most visually stunning and lovingly crafted animated feature you’ll catch all year.

Comparisons with Hayao Miyazaki’s Princess Mononke (1997) are almost unavoidable, with both films set within mystical worlds inhabited by Gods and told through the eyes of a strong but emotionally fragile young girl. However, Shinkai’s film has a much more humane feel, capturing the essence of such deeply evocative issues as loss and isolation through a genuinely heartfelt story. Despite its fantasy grounding, the film is an insightful investigation into dealing with grief (specifically the death of a loved one) and if you can prize your gaze away from the lush imagery on screen you’ll discover a surprisingly emotional and effecting tale.

Children Who Chase Lost Voices from Deep Below’s only flaw may perhaps be its ambitious approach to storytelling. Epic in its scope, the film’s multi-layered narrative sadly causes the pace to lag noticeably through its multifaceted second half, which is likely to perturb younger viewers. Despite being presented as a playful animation, Shinkai’s latest is certainly one for a more mature and discerning audience – and for that it should be commended.