The 55th BFI London Film Festival tonight announced its award winners at a Central London ceremony. Hosted by Marcus Brigstocke, the four awards were presented by some of the most respected figures in the film world, and to some of the most deserving films at this year’s LFF.

Celebrating the most original, intelligent and distinctive filmmaking in the Festival, the Best Film award, presented in partnership with American Express, was chaired by John Madden who presented the award with fellow judge Gillian Anderson.

On behalf of the jury John Madden (Chair) said: “This year’s shortlist for Best Film comprises work that is outstanding in terms of its originality and its stylistic reach. It is an international group, one united by a common sense of unflinching human enquiry and we were struck by the sheer panache displayed by these great storytellers. In the end, we were simply bowled over by one film, a sublime, uncompromising tale of the torment that can stand in the place of love. We Need to Talk About Kevin is made with the kind of singular vision that links great directors across all the traditions of cinema”.

Best British Newcomer: Candese Reid, actress, Junkhearts
This award is presented in partnership with Swarovski and honours new and emerging film talent, recognising the achievements of a new writer, producer, director, actor or actress. The award for Best British Newcomer was presented by Edgar Wright and Minnie Driver to Candese Reid, for her acting role in Junkhearts, a sophisticated, social drama about hope and the search for redemption. Starting acting at the age of nine, she joined Nottingham’s prestigious Television Workshop, and her role in Junkhearts, at the age of 18, was her first professional acting role. Candese also received a bursary of £5000 courtesy of Swarovski.

Chair of the Best British Newcomer jury, Andy Harries said, “Candese is a fresh, brilliant and exciting new talent. Every moment she was on screen was compelling”. 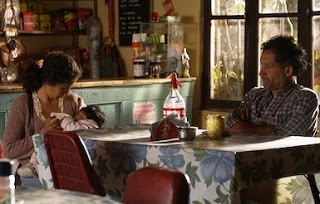 The long-standing Sutherland Award is presented to the director of the most original and imaginative feature debut in the Festival. This year, Argentinian director Pablo Giorgelli took the award for his film Las Acacias, a slow-burning, uplifting and enchanting story of a truck driver and his passengers. The director received his Star of London from film director Terry Gilliam.

The jury commented: “In a lively and thoughtful jury room debate, Las Acacias emerged as a worthy winner, largely because of the originality of its conception. Finely judged performances and a palpable sympathy for his characters makes this a hugely impressive debut for director Pablo Giorgelli”.

Grierson Award for Best Documentary: Into the Abyss: A Tale of Death, A Tale of Life – dir. Werner Herzog
The award is co-presented with the Grierson Trust, in commemoration of John Grierson, the grandfather of British documentary. Recognising outstanding feature length documentaries of integrity, originality, technical excellence or cultural significance, the jury was chaired by Adam Curtis and the award went to Werner Herzog’s coruscating study of the senselessness of violence and its consequences.

BFI Fellowship: Ralph Fiennes and David Cronenberg (as previously announced)
Awarded to an individual whose body of work has made an outstanding contribution to film culture, the Fellowship is the highest accolade that the British Film Institute bestows and was awarded to Canadian auteur David Cronenberg whose film A Dangerous Method (review here) premiered at the Festival on Monday. The Fellowship was presented by Jeremy Thomas and Michael Fassbender.

Ralph Fiennes, one of Britain’s pre-eminent actors, who has just made a bold and critically well received transition to film directing with his festival film Coriolanus (review here), was also presented with a Fellowship, this time from fellow actor and personal friend Liam Neeson.

Greg Dyke, Chair, BFI said: “The BFI London Film Festival Awards pay tribute to outstanding film talent, so we are delighted and honoured that both Ralph Fiennes, one of the world’s finest and most respected actors and David Cronenberg, one of the most original and groundbreaking film directors of contemporary cinema, have both accepted BFI Fellowships – the highest accolade the BFI can bestow. I also want to congratulate all the filmmakers and industry professionals here tonight, not only on their nominations and awards, but also for their vision, skill, passion and creativity”.