Danish cinema has enjoyed a remarkable resurgence of late, with Susanne Bier’s Academy Award winner In a Better World (2010) and the consistently provocative work of Lars von Trier. However, Denmark is a country that has so far never been famed for its animation output – something Esben Toft Jacobsen is looking to amend with The Great Bear (2011).

Jonathan, like most young boys, enjoys nothing more than escaping into the realms of his own imagination. Each summer he flees from the pressures of family life and visits his grandfather at his secluded woodland home. This year however, his 6 year old sister Sophie is tagging along, much to the annoyance of Jonathan. He attempts to put her off with outlandish horror stories of a giant bear that inhabits the neighbouring forest and who eats little girls for lunch! Noticeably perturb but determined to come along anyway, Sophie stays headstrong and embarks on the long train journey to their Grandfather’s rural home.

On arrival their Grandfather warmly welcomes them both but insists on them abiding by one simple rule – “Don’t go into the forest!” Despite Jonathan’s hunger for adventure he stays true to his word and consoles himself with building a tree house in the back yard, a glorified hunting lodge where he can peer out into the neighbouring forest in search of the mythical beast which roams there. 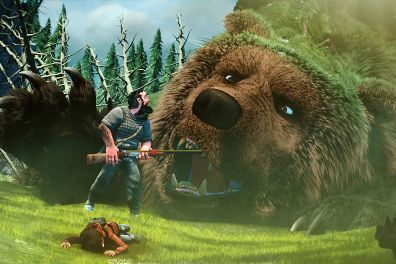 However, when a playful argument between Sophie and Jonathan goes a step too far, Sophie ends up outside the backyard and in the forbidden forest. Jonathan attempts to re-trace her steps but soon discovers she’s gone missing – leading him on a magical adventure to find his missing sister which sees him encounter a menagerie of fascinating and bizarre creatures.

There’s plenty to entertain both young and old in The Great Bear. Steeped in an abundance of fantasy and folklore, this hugely enjoyable children’s film contains enough action and adventure to keep younger viewers engaged whilst its collection of outlandish but incredibly lovable peripheral characters (including rain frogs, mini moose’s and the titular Great Bear) recalls the magic of Miyazaki and Studio Ghibli’s greatest works.

The Great Bear’s distinctly European animation (created using top notch CGI) offers a nice alternative to the recent sterile offerings of DreamWorks and Disney. Although Pixar currently have the market cornered when it comes to family friendly animation features, The Great Bear is an accomplished companion piece which, whilst lacking in that American fairy tale polish we’ve become accustomed to, more than makes up for it with a genuinely sweet and moving story.

Behind The Great Bear’s story of childhood adventure lays a cautionary tale about the current state of our environment. However it’s dealt with subtly and never feels overly preachy. Whilst in no way perfect, The Great Bear proves that when it comes to creating great animation there’s life outside of America and Japan – and sadly perhaps the only place you’ll ever encounter a mini moose.