Acclaimed Russian director Alexander Sokurov looks set to divide audiences at this year’s 55th BFI London Film Festival with his deeply profound, Venice Golden Lion-winning variation on Goethe’s tragedy Faust (2011) – a unique and transcendental adaptation, with all the characteristic flare and style we’ve come to expect from this pioneering director.

After a dreamlike sequence set above the clouds, we descend from above into a small rural town – part turn-of-the-century European village, part gothic settlement. It’s here we meet Faust (Johannes Zeiler), a professor and alchemist who craves knowledge, yet finds himself constrained by the limitations of human understanding. He’s living in poverty and unable to afford a simple meal, a predicament which leads him to the town’s moneylender, Mephistopheles (a repugnant, overweight, sinister incarnation of the devil, played brilliantly by Anton Adasinskiy). Mephistopheles takes Faust on a tour of the area’s rowdy taverns, secluded woodlands and twisting mountain roads whilst assisting the troubled professor with his existential dilemmas – waiting for the right moment to produce a contract which will grant Faust’s wildest wishes in exchange for his soul.

Those familiar with Faust’s previous incarnations will likely find their understanding of Sokurov’s difficult re-imagining hindered by some key alterations to the plot. Instead of an inherent greed for knowledge, Sokurov’s Faust desires nothing more than the love of Margarete (Isolda Dychauk), a simple yet beautiful girl from the town whom he discovers whilst attempting to make amends for killing her brother. Sokurov’s Faust is a much more compassionate character, with genuine motives behind his actions, whether it’s poverty, love or scientific advancement. He’s not forced into his deal with the devil due to a spiritual conflict but rather a more relatable issue – a distinct lack of money and a desire to be loved. 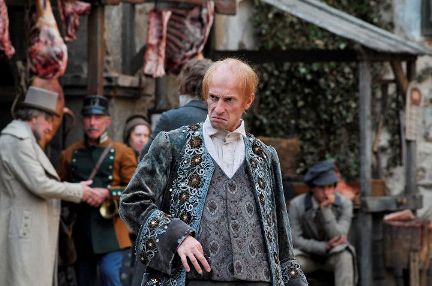 Faust contains all of Sokurov’s trademark filming techniques. His use of post-sync dubbing and anamorphic distortions create an almost dreamlike state, at times mesmerising whilst at other extremely confusing (the abundance of scenes shot using this unconventional warping of the camera lens perhaps make greater sense after multiple viewings, no doubt revealing some subtle symbolism). Faust’s feel and tone recalls numerous gothic tragedies, whilst the sumptuous use of sulphuric tones and gold tinged lighting perfectly heightens the film’s more intensely emotional scenes.

The striking performances of Adasinskiy and Zeiler as the film’s central protagonists are exceptional, capturing both the serious themes of the original source material whilst tentatively conveying the stories incredibly nuanced comedy. They’re only overshadowed by the world Sukorov has created for them to perform in. This magical, gothic town feels so alive and vivid, from the ensemble of animals which often fill the frame to the genuinely fascinating activities which surrounds the action, this artificial world Sokurov has fashioned is of enormous interest – further helped by the stylish work of cinematographer Bruno Delbonnel.

It would be unfair not to mention that Faust’s lengthy runtime and complex narrative make it somewhat of a difficult viewing experience, demanding the utmost patience from the audience in order to successfully articulate the rich imagery presented on screen. However, given the correct degree of attention and perseverance, Faust makes for a thoroughly entertaining investigation into the existence of the soul and its uses. Faust also makes for a perfect companion piece to Sokurov’s ‘trilogy of power’, with the plot drawing great parallels with his previous, deeply personal examinations of Hitler, Lenin and Hirohito (although none of their malevolence come close to matching the ridiculousness involved in Adasinskiy’s grotesque and sinister portrayal of the devil).

A complicated but thoroughly rewarding theological journey into themes of love, redemption and greed, Faust deserves all the acclaim it’s so far received, however it looks unlikely to gain the same appreciation outside the comfort of the festival circuit.

American Express understands the power that film has to inspire, entertain and create lasting memories. Sponsorship of the Festival provides Cardmembers with exclusive access to a host of film premieres and cultural events through its award-winning Preferred Seating programme. For more information and to sign up to the newsletter, visit amex.co.uk/access.