Written and directed by Dee Rees, Pariah (2011) – starring Adepero Oduye, Kim Wayans and Aasha Davis – is a refreshingly naturalistic film which explores themes of sexuality and acceptance without ever pandering to the formulaic approach of similar teen dramas.

Pariah opens in a seedy back alley strip bar where Khia’s My Neck, My Back (Lick it) – with its exploitative lyrics and earth shattering bass – reverberates at an ear damaging decibel level. Amongst this deeply misogynistic setting we join two effeminate looking young men thrusting dollar bills at the scantily clad dancers aiming to please them. It isn’t until we join them later on the night bus home that we discover these soft skinned young men are actually teenage girls in masculine attire and the horribly lit bar was in fact a lesbian nightclub.

One of these girls is Alike (Adepero Oduye ) a subdued and tender young woman struggling for acceptance. Her sexuality is a mute subject, with her Christian mother and old fashioned father reluctant to accept her boyish mannerisms as anything other than a phase. However, as emotions within the household begin to fray, it can only be a matter of time before Alike’s homosexuality is exposed. 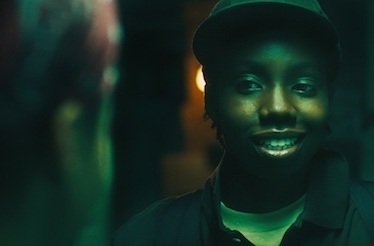 Pariah’s aesthetics are reminiscent of those of a documentary, using an abundance of close ups and over-the-shoulder shots to thrust us into Alike’s world of fragile relations. Whilst successful in many ways it sadly distracts from the emotional core of the film, with the more heartbreaking and devastating moments of Alike’s life diluted through a collection of claustrophobic framing and a heavy handed use of lighting and sound.

Pariah’s sophisticated and intensely realistic script is what ultimately raises the film from the depths of gritty teen angst to a fully fledged exploration of sexuality. Amplified by some incredibly nuanced and intuitive performances, the family relations on show are lovingly captured – raw without ever succumbing to melodrama and sublimely presented.

The scenes involving the whole family are by far the most enjoyable, grasping the genuine inherent love between these four troubled individuals whilst also elevating the underlying tension that’s ever present. These scenes are shot using subtle techniques that may lack the visual flair apparent in the rest of the film but ultimately add a welcome dose of realism. Indeed, it’s at these moments when the film’s overly stylised methods are retired in favour of more conventional methods to capture the conflict which burns at the heart of this fragile family unit that Pariah really excels.

Whilst the story’s outcome may be inevitable, Pariah’s touching tale of one girl’s struggle to find acceptance for who she is becomes less about her eventual ‘outing’ but rather the feelings and emotions she goes through to get there. A wonderful example of independent filmmaking, Pariah’s heavy reliance on tight, coherent dialogue and strong performance holds it above numerous other films attempting to tap into modern youth culture.