The latest in a line of strong German entries exploring mental illness at this year’s 55th BFI London Film Festival, Hans Weingartner’s Hut in the Woods (Hütte im Wald, 2011) focuses on the lives of to down-and-outs, former mathematician Martin Blunt (Peter Schneider) and recently orphaned Ukrainian youngster Viktor (Timur Massold), who both become homeless through circumstance. Together, they escape to the forest and build a hut within with to live out their lives.

Weingartner, perhaps best known in the UK for 2004’s The Edukators, presents a side of German society rarely seen, sensitively depicting the type of existence that can befall the nation’s homeless. Adversely, figures of authority are painted very unsympathetically by the director; Martin’s former company refuses to re-employee him after a short stint in care despite promising the contrary; the bailiffs that arrive to evict Martin a few days later are unscrupulous in their work, denying him almost any right to hold onto his personal property. In one early scene, Martin is knocked down by an Audi, its driver more concerned with possible damage to his car than our injured protagonist. 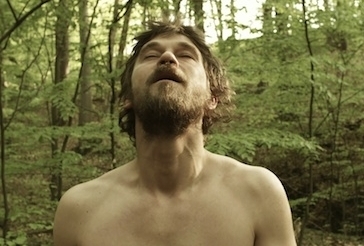 After being befriended by the spirited, Ukrainian-speaking Viktor (who loses his mother to a drug overdose at the beginning of the film), the unlikely pair head out into the wilds in order to create their own new Eden.

Dream sequences help to flesh out the roots of Martin’s disorder, made worse by an abusive upbringing at the hands of his alcoholic father. Yet the hows and whys involved in bringing together Martin and Victor are ultimately inconsequential. Hut in the Woods is more a meditation on friendship and the enduring nature of the human spirit through time of extreme hardship than a social commentary on Germany’s treatment of vagrants.

A fitting comparison to make would be with John Hillcoat’s affecting post-apocalyptic drama The Road (2009). Both films explore the trials and tribulations of those without stability, moving from one piece of shelter to the next whilst on the perpetual lookout for food and other resources. A man and boy inter-relationship is also central to both films, and through the pairing of Martin and Victor, Weingartner has succeeded in realising a story with just as much tenderness and warmth.