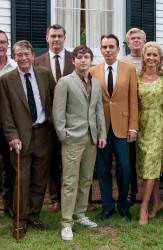 ★★☆☆☆
Directed by and starring Billy Bob Thornton, Jayne Mansfield’s Car (2012) is a fractured comedy drama set in the 1960s that’s built around a conflict of cultures. Boasting an ensemble cast which includes Robert Duvall, John Hurt and Kevin Bacon, Thornton’s latest offerings is one of the hottest tickets at this year’s Berlinale. The Caldwell family live in Morrison, Alabama and compromises of three generations – each with their own war to have lived through. Jim Caldwell (Duvall) is a First World War veteran who finds it difficult to break from the hard, cold exterior he developed whilst working as a medic in 1940s France. 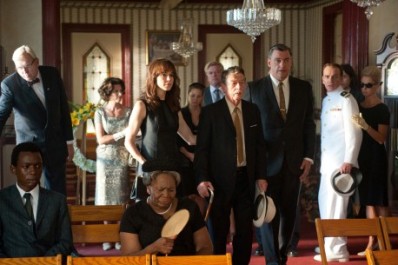 Out of his three sons, two saw conflict during the Second World War, each with their own repressed memories of the horrors they witnessed and each with their own unique way of dealing with them. With the Vietnam War now in full flow, Caldwell’s grandson also looks set to fight his own war – yet the unpopularity of the war has finally spread south, dividing the family and revealing the faintly plastered cracks of their relationship. This fragile family dynamic is further tested when a telephone call come out of the blue to inform Jim that his wife has died – with her dying wish to be buried in the land she was born. This earth-shattering news culminates with Jim’s ex-wife’s husband and his family travelling to this quiet Alabama town, resulting in an awkward coming together.

The problem with Jayne Mansfield’s Car is that it’s very much two different films carelessly mashed together. The first is a whimsical comedy about a dysfunctional family whose inability to connect is magnified by the addition of external influences. The second is a heavy handed anti-war film which threatens to boil over into an outspoken political outburst. Thornton never quite manages to get the balance between humour and sentiment quite right and all too often cheap jokes are proceeded by emotionally heightened scenes intended to evoke a strong heartfelt reaction from the audience – resulting in the lighthearted comedy becoming diluted by the misfiring compassion injected into the script to add some gravitas to its anti-war statement. Jayne Mansfield’s Car is as much of a mangled mess as its namesake – a thoroughly disappointing film which, whilst coming close to finding its feet in the final act, ultimately falls flat on its face.

For more of our Berlin Film Festival 2012 coverage, simply follow this link.