The Flowers of War (Jin Ling Shi San Chai, 2011) is a dramatic portrayal of the horrendous Nanking massacre which occurred in 1937. Directed by Zhang Yimou and starring Christian Bale (soon to be seen reprising his role in the final chapter of Christopher Nolan’s Batman trilogy, The Dark Knight Rises) The Flowers of War attempts to depict the true horror behind this tragic chapter of Chinese history.

The Japanese invasion of Nanking has plunged the then Chinese capital into an unrecognisable state of chaos and destruction. Bodies line the streets like blood stained carpets and the Chinese military have all but surrendered. A lone American mortician (Bale) has found himself caught up in the madness – originally sent to perform the burial rights of a recently deceased priest, he now finds himself running for his life. He finds refuge in the cathedral he’s been assigned to visit, yet within its palatial walls are a group of abandoned schoolgirls. Despite his reluctance to assist these endangered girls, he soon finds himself their protector. 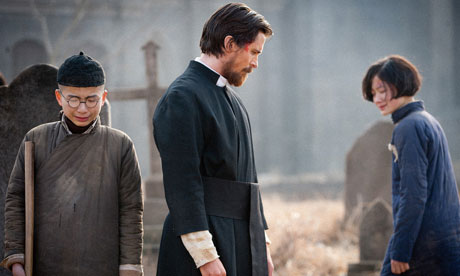 The next day the cathedral is paid a visit by the unlikeliest of patrons – a group of prostitutes searching for a place to hide. At first their philandering ways and loose morals clash with the girl’s catholic upbringing but it doesn’t take long till they realise they’ll have to cooperate if they’re to have any chance of surviving.

The Nanking massacre resulted in the death of over 200,000 Chinese civilians, so needless to say its a delicate matter to adapt for the big screen. Whilst The Flowers of War has its moments, where it perfectly captures the terrifying events which happened during this incredibly violent Japanese occupation, it’s also guilty of glamorising it’s violence for shock value – adding an unnecessary cinematic quality to a historical event that doesn’t need to rely on over blown special effects to effectively portray its harrowing story – cheap jokes, lingering ass shots and an exaggerated redemptive journey for Bale’s character certainly don’t help either.

Despite its misguided approach there remain enough positives to make The Flowers of War a watchable piece of action drama. The performances of its young cast are all exceptional, easily making up for the film’s need to evoke emotion through bloodshed instead of character development. The story at the heart of the film is also worthy of note and has the potential to be truly heartbreaking if dealt with in a more compassionate manner.

As a piece of exhilarating action filmmaking there’s certainly plenty of enjoyment to be had from The Flowers of War however, for a more educational and emotionally draining depiction of the Nanking massacre give Chuan Lu’s exceptional City of Life and Death (2009) a watch – you won’t be disappointed.