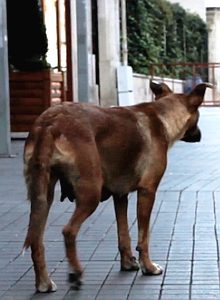 Our four-legged companion the dog is commonly seen as “Man’s best friend”. Yet in Turkey, canines are elevated far higher, seen as loyal protectors, valued confidants and more recently as public contemporaries. Andrea Luka Zimmerman’s Taşkafa, Stories of the Street (2013), a loose documentary about the street dogs of Istanbul, furthers her own work as a cultural activist, presenting us with the erosion of Turkey’s communities through a dog’s-eye-view. The film takes its name from one of the most revered street dogs of Istanbul, a celebrity amongst the locals and the guardian of this congenial community. 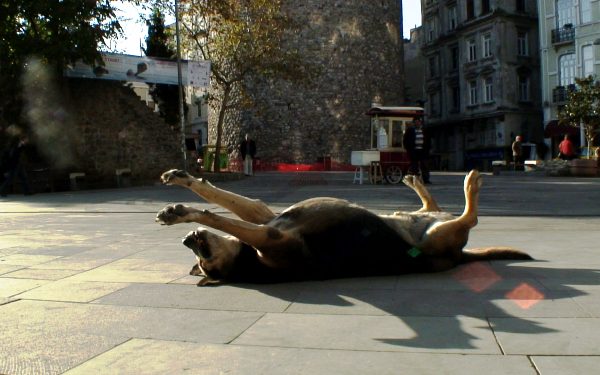 Zimmerman walks us through the streets of Istanbul, introducing us to the dogs who have made the back-alleys and plazas of the city their home. From vagrants to office workers, each interviewee gives us their own individual account of the roving animals. Each anecdote bequeaths us with a heartwarming tale, with the reverential tone and genuine admiration for these lovable creatures highlighting just how important community spirit and national heritage is to the population. Sadly, this is a society caught in a state of flux. As the gentrification of great swathes of Istanbul see collars being placed on dogs, the freedom of its people is also being seized as a consequence of the city’s new ‘globally acceptable’, EU-friendly image.

Much like Mikhail Bulgakov’s Heart of a Dog, Taşkafa is a biting satire of the ‘administration’ – namely, the global impact of globalisation and the political stranglehold of capitalism. The passivity of the dogs echoes that of the people, powerless to prevent themselves from being walked over. By playing on our inherent sympathy towards animals, Zimmerman allows us to observe our own warped reflection and understand the impact that Westernisation has on the rest of Europe and further afield. Watching the interaction between the two-legged and four-legged inhabitants of Istanbul (included cats and seagulls) allows the audience to draw their own parallels with the broader, more universal issues raised by Zimmerman’s film.

Sadly, once the anthropomorphism of these animals gives way to the doc’s framed narrative of hypnotic imagery and poetic narration, we quickly lose momentum, with Taşkafa perhaps befitting of a more succinct and condensed approach. Furthermore, whilst this initially heartwarming study of the coexistence of man and dog feels like an optimistic celebration of the power of community, Stories of the Street’s eventual finale – as Zimmerman takes us on a boat trip to the “wicked island” where the Turkish government sent thousands of dogs to live without food or water in an attempt to eradicate them – leaves a resolutely bitter taste in the mouth.