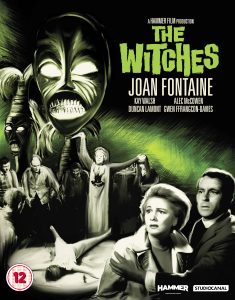 Cyril Frankel’s The Witches (1966) has long been one of the overlooked works in Hammer’s horror stable. Though attention may be drawn by the presence of writer Nigel Kneale in adapting Norah Lofts’ novel The Devil’s Own for the big screen, the lack of the studio’s regular star talent (Cushing, Lee et al.) made it something of a curio. Kneale’s subsequent criticism of the film for abandoning his humorous treatment in favour of conventional horror fare may also have led to its neglect. It is perhaps deserving of a little more attention, however, and StudioCanal are on hand to deliver a beautiful new restoration. 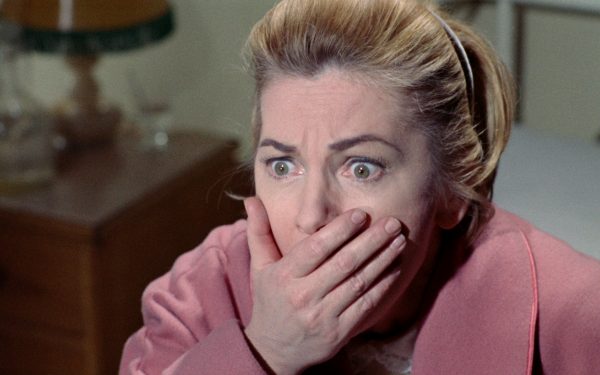 Joan Fontaine makes her final big screen appearance in the film playing the part of Gwen, a teacher convalescing in the pastoral British countryside. After a mental breakdown brought on by witch doctors plaguing an African missionary school at which she worked, she takes a position as headmistress of a small school in the quaint village of Heddaby. Regrettably for Gwen, though not from the audience, it would seem that she has not been able to flee the occult as she may have hoped; the village vicar is not a vicar at all, and there is an all too familiar black cat stalking the streets. Ironically, given the scribes misgivings, Frankel’s The Witches actually works rather well as an mysterious and understated chiller.

The strange behaviour of some of the inhabitants, not least the wonderfully unsettling Granny Rigg (Gwen Ffrangcon-Davies), give this idyllic British locale a disquieting air. Restraint is the watchword despite the gradual escalation of the occult goings on, and the truth of what is happening behind the twitching curtains and privet hedgerows remains tantalisingly elusive. It is, in fact, the revelations in the final act and some off-kilter pacing that threaten to derail proceedings altogether; luckily, Fontaine manages to marshal things admirably with a fine central turn. What is particularly intriguing about this film is the potential effect it had on films that came after it, including The Devil Rides Out (1968) and The Wicker Man (1973).

It’s similarly hard as a modern viewer not to see a prototype for The League of Gentlemen’s Royston Vasey in this insular village and its grinning malevolent butcher. Some consider this one of Hammer’s overlooked gems and it is easy to see why. Fontaine is excellent in the lead giving a subtly emotional performance, and the film ratchets up the tension in brilliantly underplayed – and suitably British – fashion. Admittedly, the last act is a total misstep tonally but it’s not enough to completely undo the good work that has come before (and potentially after) it. Frankel’s The Witches is certainly something that fans of the studio and the genre should check out given half the chance.