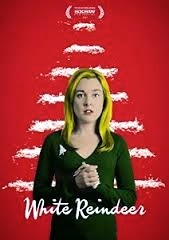 ★☆☆☆☆
Even as far back as 1843, when Charles Dickens penned his illustrious novella A Christmas Carol, the materialism of Christmas was already apparent. Dickens wrote “Christmas is a poor excuse every 25 December to pick a man’s pocket” and it’s a cynical, yet astute statement that resonates even to this day. Fast-forward 171 years and we have Zach Clark’s pitch-black Christmas comedy White Reindeer (2014) – a film that appropriates the distilled essence of contemporary consumerism and the gauche spectacle of the holiday season and examines it through an excruciatingly pretentious and emotionally detached tale of grief and forced self-discovery. 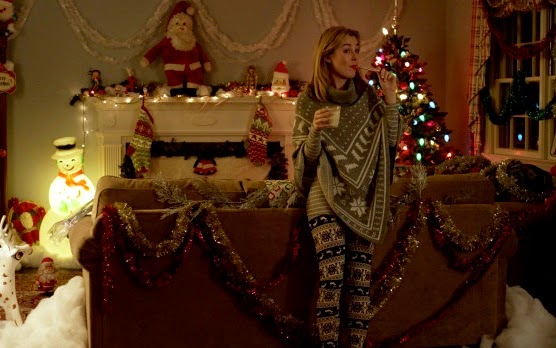 Anna Margaret Hollyman stars as Suzanne, an vacuous estate agent who brims with yuletide spirit. Suzanne’s job is an important signifier of her character; she’s a woman for which happiness flows equally from the companionship of others and the making of a home as it does from the accumulation of material wealth. Christmas is just around the corner and the news that her husband, a TV weatherman, has been awarded a new job in Hawaii means life couldn’t be sweeter. However things change when Suzanne’s husband is murdered just 24 days before Christmas. As each door on the advent calendar is peeled open Suzanne spirals further into a pit of despair, her sorrow only exacerbated by the discovery that her husband was having an affair with Autumn (Laura Lemar-Goldsborough).

Despite her dependence on material possessions, even the most extravagant shopping spree – including the purchase of a red cashmere sweater that symbolises her yearning for some sense of worth – can’t anesthetise the pain she’s experiencing. Clark’s acerbic depiction of capitalism and the social ills of consumerism are hindered by his general loathing for humanity. From the film’s materialistic protagonist, her stiff-upper lipped parents, or her sexual deviant neighbours – played by Lydia Hyslop and mumblecore luminary Joe Swanberg – Clark’s abhorrence towards his characters spews forth from the screen, alienating the audience and building a cold, inhospitable exclusion zone between the viewer and the psychological conundrums of Clark’s cast. A joyless pantomime that covers individualism the commerciality of Christmas and middleclass attitudes to sex – best surmised by a scene in a strip club where an elderly patron asks a lap dancer if she’s finished her Christmas shopping – White Reindeer is about the fake notion that happiness can be bought for a price, be that self medicating via online shopping or through pleasures of the flesh. However the film’s comatose tone makes it hard to decipher the film’s true agenda.

Aside from the Clark’s muddled perspective, it’s hard to feign interest in a film that sources its humour so mercilessly from the misery of others, pitched at those who enjoy dispensing smug self-righteous judgement and basking in the embarrassment of others less conversant in the source of contemporary capitalist melancholy. Equally, watching Suzanne – the personification of white middleclass privilege – attempt to find redemption by living vicariously through a black stripper and her economic hardship would be hard to swallow if it wasn’t for the fact that each of Clark’s characters are as just as poorly fleshed out through the same broad strokes. At the end of the film, no lessons are learnt, nothing is resolved and the magic of Christmas is packed away for another year just like a store-bought plastic tree – devoid of character, spirit and purpose.