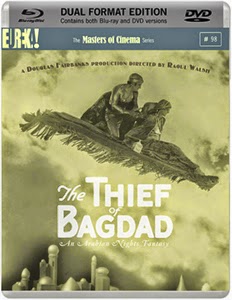 In the early 1920s, Douglas Fairbanks was transformed from comedy star into swash-buckling heartthrob via The Mark of Zorro (1920), The Three Musketeers (1921) and Robin Hood (1922). Arguably one of the high-notes amongst his sensational ripping yarns is 1924’s The Thief of Bagdad, a reworking of the Arabian Nights that gave ample opportunity for his charisma to burst from the screen. His performance is complemented by lavish production design and unparalleled special effects in what was one of the decade’s most expensive features. Now released on a terrific blu-ray transfer as part of the Masters of Cinema collection, this silent fantasy epic is well worth revisiting. 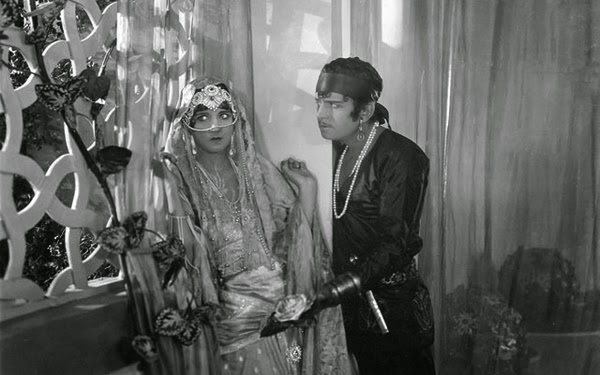 Fairbanks himself penned the script and his character, Ahmed, is a perfect role for the star – dashing, irreverent and constantly required to employ impressive gymnastic feats. A pickpocket by trade, he spends his days wandering Bagdad’s streets living as he pleases. “What I take, I want” he remarks to a shocked priest with a rye smirk. It is a philosophy that will be tested when he sets his eyes on his next prize – the beautiful princess (Julanne Johnston) – but Fairbanks does well to make sure that Ahmed’s vitality and allure are never compromised – they are absolutely key to the film’s overall success. Of course, even at his worst he is a scoundrel – much like Disney’s Aladdin (1992) (who owes Ahmed’s character a great debt) be it stealing the purse of an unpleasant rich man, or a neglected plate of food.
Johnston is wonderfully cast as the princess who falls in love with Ahmed and conspires to marry him even when she comes to know that he is not the prince he previously claimed to be. Sôjin is equally effective as the film’s dastardly Mongol prince, although the character never quite develops into the nemesis he would in a modern version. Despite its narrative drive to unite Ahmed and the princess, the structure is actually far more episodic, reminding one that the focus during this period was on dazzling spectacle. While The Thief of Bagdad is enormous fun, it sadly struggles to sustain this pace across the entirety of its runtime.

The city constructed around Ahmed is a marvel in itself, a gigantic art deco Bagdad designed by William Cameron Menzies that provides the hero with all manner of impressive palace walls to scale during his escapades. Elsewhere he clambers magical ropes, just one example of a whole new world of impressive visual effects that also included a winged horse and a flying carpet. Director Raoul Walsh, who was famously neglected by contemporary critics, shoots everything with a shimmering quality that only heighten the dreamlike milieu that Fairbanks had always wanted. All of which amounts to a rollicking magic carpet ride that suffers from narrative lulls, but The Thief of Bagdad remains airborne thanks to splendid sets, cinematic wizardry and the sheer star power of its leading man.