DVD Review: ‘You and the Night’ 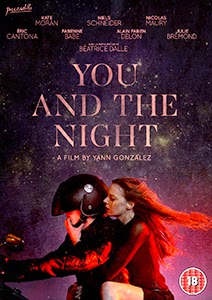 After causing a stir on the Croisette where it premiered last year in the Critic’s Week Sidebar You and the Night (2013) is the debut feature from Yann Gonzalez and it is as infuriating as it’s spectacular. With a wholly original score from the director’s brother, M83, it seems unsure of what it wants to be. To say it’s confused would to an understatment, and no matter that it’s moments of wonder make one imagine what could have been, ultimately we are left with a failure, which stems from the risible unintentionally laugh-out-loud first half. The opening forty-five minutes create problems that leaves the film in a place that no matter how great the last forty-five are, it cannot save the film from it’s own petard. 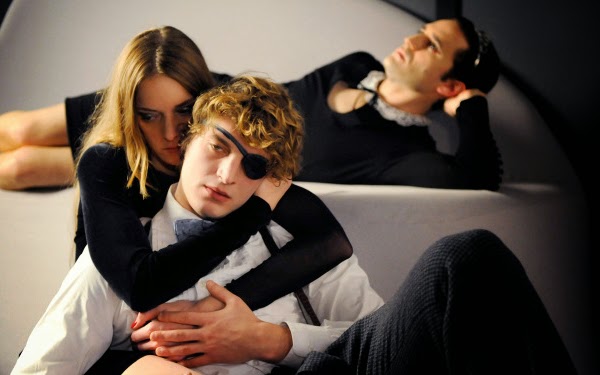 We are introduced to the central trio of Ali (Kate Moran), her one eyed fragile beau, Matthias (Niels Schneider) and their transvestite maid Udo (Nicolas Maury) in a strangely rousing prologue, that louchely reminds of Leos Carax. We watch a dream turn into reality that in itself is dreamlike. After returning to conciousness, all three of them head back to their 80s horror apartment; a place that seems to be echoing the worst vices of that decade’s black ash and leather. There they await their guests for an energy replenishing orgy: The Stud (Eric Cantona), The Slut (Julie Brémond), The Star (Fabienne Babe) and The Teen (Alain­Fabien Delon). Arriving one by one, we’re introduced to an array of predictable sexual issues: from The Stud’s desire for poetry when cursed with well endowment to The Slut’s mother issues.

And then the second half comes and everything changes. At once the film twists and becomes a transcendence by twilight that illuminates our nascent characters into existential archetypes that call upon both Nebuchadnezzar’s fevered dreams and Scheherazade’s tales of the past. In a forest of the mind, they admit to themselves and each other what ails them and hopes to come, healing themselves in the process. Dawn approaches and, willed towards finality by M83’s score, there is offered the hope of continence that with a red roaring sun, an enigmatic smile of promise and possibilities of an alternative existence, leaves us formally exhausted and trying to forget the first half. You and the Night is a bizarre, barely contented work from a filmmaker that is certainly one to watch.