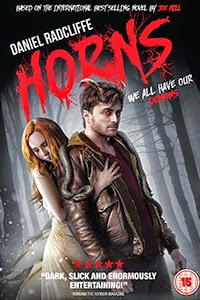 Combing a nostalgic yet bittersweet longing for childhood innocence with a devilish plunge into the deepest recesses of human depravity, Alexandre Aja’s Horns (2014) is truly a Frankenstein’s monster of a movie. A smorgasbord of genre tropes, welded together with great dexterity and dark sophistication, the results are sadly a disjointed and tonally incoherent fantasy thriller that overstays its welcome. Starring Daniel Radcliffe and Juno Temple, Horns makes a commendable attempt to eschew the constrictive trappings of genre filmmaking, yet for all its admirable traits it fails to unburden itself from the shackles of a ridiculous conceit. 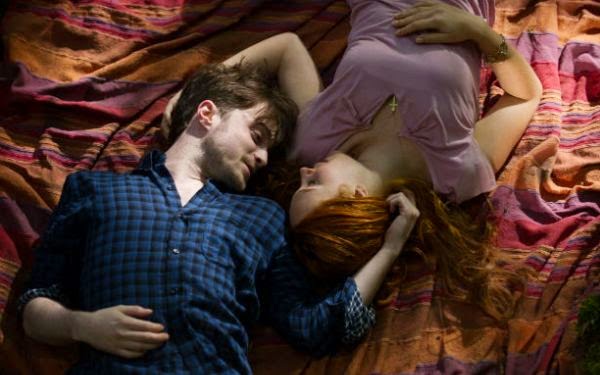 In a calculated effort to escape forever being typecast as JK Rowlings’ iconic boy wizard, Radcliffe has played Allen Ginsberg, tackled the dense prose of Mikhail Bulgakov and now finds himself as Ig, the prime suspect in the murder of his own girlfriend Merrin. Almost everyone in Ig’s close-knit town has turned against him, and he finds himself forced to live in solitude. There’s still one person fighting his corner, childhood friend Lee (Max Minghella), who, conveniently for Ig, is a defense attorney and just so happens to be the only person in town who doesn’t notice the horns that miraculously appear on his forehead. As if by some divine intervention these horns make Ig a reluctant moral arbiter, with each person he encounters compelled to disclose their darkest secrets and desires.

Through a series of flashbacks to his childhood and some eye-opening confrontations with the town’s more nefarious residents Ig slowly begins to realise that his new satanic guise is more of a blessing than a curse and sets about using his new found gift to discover Merrin’s real killer. The visceral gore and unrelenting violence of Aja’s High Tension (2003) caught the eye of Hollywood producers and, ever since, his distinctive brand of savage violence and sexual ugliness has permeated the American horror landscape. Whilst Horns shares the same burnished aesthetic as similiar teen horrors, the sexual debauchery and troubling psychosis that Aja brings to table makes this an altogether darker proposition. An uncharted voyage into the depravity that gnaws away at a society enraptured by sensationalist news reporting it initially feels like an attempt to comment on the power shift from Religion to media. Ig’s literal transformation into the demonic beast he’s portrayed as by the news gives Radcliffe plenty to work with, and he willingly jumps head first into Aja’s twisted world in what is a commendably committed, if perhaps ill-fitting performance.

However, whilst Aja’s New French Extreme contemporaries have been hailed for their subversive attitudes towards social orders, Horns‘ limp condemnation of the church and the media feels more of an accidental byproduct of a film employing extreme and provocative imagery to titillate rather than arouse an impassioned discourse. Whilst it struggles to coalesce its outlandish premise – courtesy of Keith Bunin’s screenplay and Joe Hill’s original novel – with its director’s twisted predilection for gleefully peeling away the layers of national propriety, there are some agreeably mischievous instances where comedy, melodrama and horror perfectly align and sex and death collide head on. Ig inspiring an all-out cat-fight between local news anchors raises a wry smile, whilst a elderly receptionist articulating her disgust at another lady’s parenting style is neatly sewn-up by the daughter’s own alarming admission of animosity towards her mother. Sadly, Horns outstays its welcome by a good half-hour and by the film’s frivolous, CGI-laden final third any enjoyment previous harvested quickly fades and we’re left with a silly and uneven whodunnit that feels like five wildly different films vying for your attention.