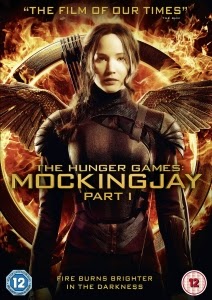 “If he sends reinforcements everywhere, he will everywhere be weak.” Sun Tzu may not have been talking about The Hunger Games: Mockingjay – Part 1 (2014) but these words in The Art of War provide a neat critique of a film aptly concerned with campaign strategy. This is the film – and the first half of the book – that really opens up the world of the franchise and expands the purview of the narrative broaching conflict on a far grander scale. Whilst it remains an enjoyable and entertaining romp, taking the action out of its comfort zone also does the same to the narrative and the result is fuzzy and unsatisfying. What makes The Hunger Games series work is Jennifer Lawrence’s Katniss Everdeen. 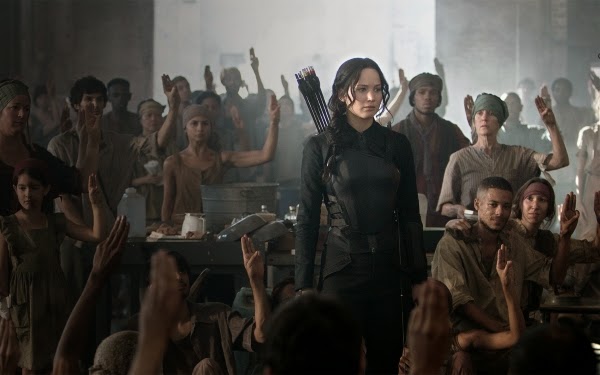 A fiercely strong young woman, Katniss is in her element in the wild; sullen and awkward, she is never at ease in company or dolled-up for others’ benefits. In the first two instalments in the series, she is thrust into a life or death situation. It’s survival of the fittest for the amusement of the braying masses in the authoritarian dystopia of Panem and Katniss proves to made of the winning ingredient. Now the games are over, though, and she is being asked to stand-up as a symbol to which the oppressed society can rally – the Mockingjay. This seems like it has the potential from great dramatic tension, but where Katniss finds herself adrift in the wider political world, so does the film. One of the most cutting – if hardly subtle – critiques underlying the entire series is the manipulation of and by the media.

The garish corpulence of the the Capitol and the varying poverty of the 12 Districts are all spoon-fed propaganda by President Snow’s (Donald Sutherland) dictatorial government by glitzy suits and perfectly manufactured smiles. Mockingjay – Part 1 seeks to expand on this point with Snow’s message being countered by the ‘Propos’ of the resistance, masterminded by Plutarch Heavensbee (the late Philip Seymour Hoffman) and starring Katniss. The insidious nature of ‘the message’ and the hypocrisy of fighting false image with false image is something that naturally raises the hackles of the straight-talking heroine, but this is paid lip service by a script that lacks the edge of its predecessors. Their media satire was perfectly pitched – and apposite – for a young audience raised in an era of mass consumption, but while the barbs of Mockingjay – Part 1 are arguably more subtle and meaningful, they are also less successfully deployed.

Similarly under-served is the notion of the rebellion’s opposing society – President Alma Coin’s (Oscar winner Julianne Moore) – as an equally corrupted mirror of the current regime. It is the socialism to the Capitol’s capitalism, either one as flawed and fascistic but this appears in small moments, rather than being a strong through line. This is perhaps down to Katniss’ own lack of focus, torn as she is between Peeta (Josh Hutcherson), Gale (Liam Hemsworth) and hysterical indecision. Fortunately, the moments when she regains her steel – particularly in a defiant speech after a callous Capitol attack – remind of how great she can be. With Mockingjay – Part 1 already feeling a lot like the set-up for a blistering denouement, one can only hope that November’s finale sees Katniss and the series back on their A game.