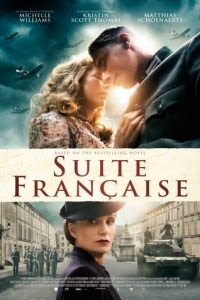 Saul Dibb’s film adaptation of Suite Française (2014) dramatically compresses the many strands of Irène Némirovsky’s incomplete World War II novel, discovered by her daughter after her death and published to great acclaim in 2004. Némirovsky intended to write five parts dealing with the tumult of war but only completed two novellas – she died in Auchwitz in 1942. In the second, Dolce, she created a vivid portrait of a provincial French town, Bussy, through the various reactions of its citizens to the German occupation. In their adaptation, Dibb and co-screenwriter Matt Charman concentrate on Dolce and the love affair between Lucille Angellier (Michelle Williams) and Bruno von Falk (Matthias Schoenaerts). 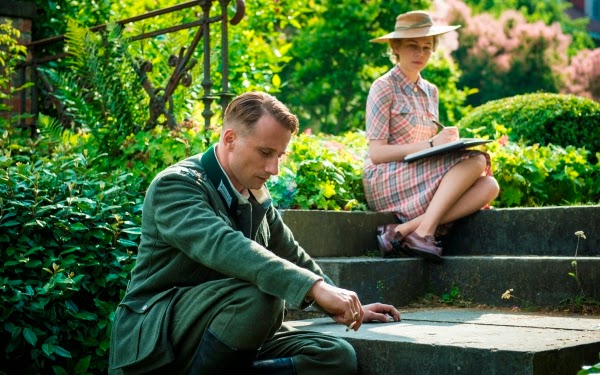 He is a young German officer billeted in the house of her overbearing mother-in-law Mme Angellier (Kristin Scott Thomas). Lucille’s husband is absent; a prisoner of war. We learn he had been unfaithful to her before its outbreak. Mme Angellier is a calculating land owner who tries to use the occupation to her best advantage. Their neighbours, Madeleine (Ruth Wilson) and her volatile farmer husband Benoit (Sam Riley), feisty Celine (Margot Robbie), the self-serving Viscount (Lambert Wilson) and his waspish wife (Harriet Walter) become secondary characters in the film, important only so far as they affect the central love story. Fortunately, it’s a poignant and dramatic affair that holds interest throughout. Lucille and Bruno share a passion for classical music and this is what brings them together.

Before the war, Bruno was a composer and he asks to play Lucille’s piano. As a cautious love blossoms between the pair, tensions in the town escalate. Some of the German soldiers begin marauding, chasing the French women and taunting the few remaining men. Then the townsfolk start to voice their grievances with one another and betray their neighbours to the occupiers. Bruno is increasingly called upon to dispense rough justice. Things come to a head when Kurt Bonnet (Tom Schilling) a German officer is fatally shot and Benoit is forced on the run. While it may not appeal to purists, purging some of Némirovsky’s complex characterisation and finer detail serves the film well. Charman and Dibb hold on to the spirit of the original and its uncomfortable exploration of collaboration and betrayal. Love and war are a winning combination and Eduard Grau’s cinematography, terrific performances all round, in particular the simmering chemistry between Schoenaerts and Williams, should ensure Suite Française‘s success as well as adding to Némirovsky’s fan base.