Film Review: ‘The Night Before’ 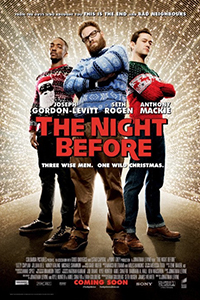 Getting the old band back together, Seth Rogen assembles a number of usual suspects for a stocking full of festive Big Apple debauchery in The Night Before (2015). Director Jonathan Levine worked with Rogen and co-star Joseph-Gordon Levitt in the touchingly sincere 50/50, a bromance amidst a fight against cancer. Offering little more than a dusting of serious subject matter here, his latest outing is more akin to the lewd, bawdy – and at times offensively hilarious – works of Judd Apatow, which saw many of the frat pack rise to fame. 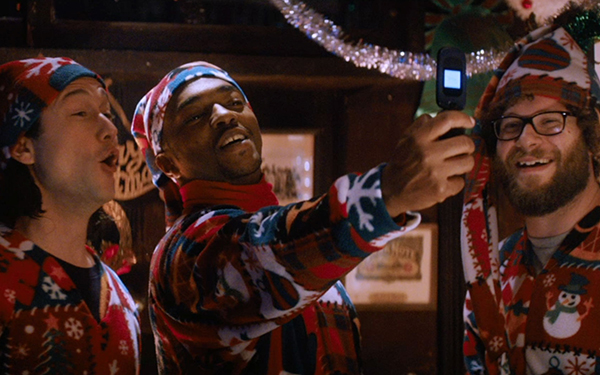 To lend it an air of holiday mysticism,  The Night Before begins with the opening of a leather-bound book; Ron Burgundy would be proud. In 2001, a young man – Ethan (Levitt) – loses his parents at Yuletide to a drink driving accident. His two best friends, Isaac (Rogen) and Chris (Anthony Mackie), pledge to be his new family and a 24th December tradition is born. Decked out in suitably offensive Christmas sweaters, the boys head out on the tiles of NYC to see the bright lights, sing karaoke, eat Chinese food, drink a lot.

In 2015, they even dabble in the box of Craigslist-purchased narcotics that Isaac’s heavily pregnant wife (an amusing, albeit bitesize turn by Jillian Bell) has inexplicably procured for them. Eight years ago, Rogen freaked out at the prospect of becoming a father in Knocked Up. In The Night Before he is equally ill-equipped for fatherhood and a concoction of ‘shrooms, weed and cocaine don’t help the supposedly successful lawyer from keeping a lid on things. That said, a conversation had with ‘Spencer’ and his family at a nativity scene outside a church will have you in stitches. Elsewhere, the shameless exhibition of Red Bull products left, right and centre and Sony’s Experia phone are the butt of jokes during the film, and rightly so. Not since Starbucks, IMAX and Pandora teamed up to make Jurassic World has product placement been so excruciatingly blunt. Gordon-Levitt’s Ethan is a lovelorn failing musician who finally gets his hands on passes to the famed Nutcracka Ball. Golden Ticket in hand, it is he who keeps the Christmas tradition alive, at one point punching a pair of men in Santa suits for besmirching the spirit of the season.

Christmas movie references come thick and fast – Chris is hounded by a real life Grinch (Ilana Glazer) who channels her inner Hans Gruber and lays tricks à la Macaulay Culkin to good effect. The quirkiest of cameos here, however, comes from Michael Shannon, appearing as a philosophical, prophesising stoner who is part drug-dealing Jay Gatsby, part ghosts of Christmas past, present and future. It is hard to know whether to laugh at or be terrified by the great actor’s sunken eyes and menacing drawl. It is also difficult to decipher how it could take the collective forces of four screenwriters to come up with a script that is little more than Jew jokes, sexual innuendos and borderline racism. A cloyingly sentimental conclusion is tacked on for good measure but does demonstrate one vital ingredient; it’s time to grow up, fellas. The Night Before is the dumb, run of the mill humour we have come to expect from Rogen and whiles it does offer the gift of a festive adult-only trip to the cinema, this is one present that will probably be in the bin by Boxing Day.