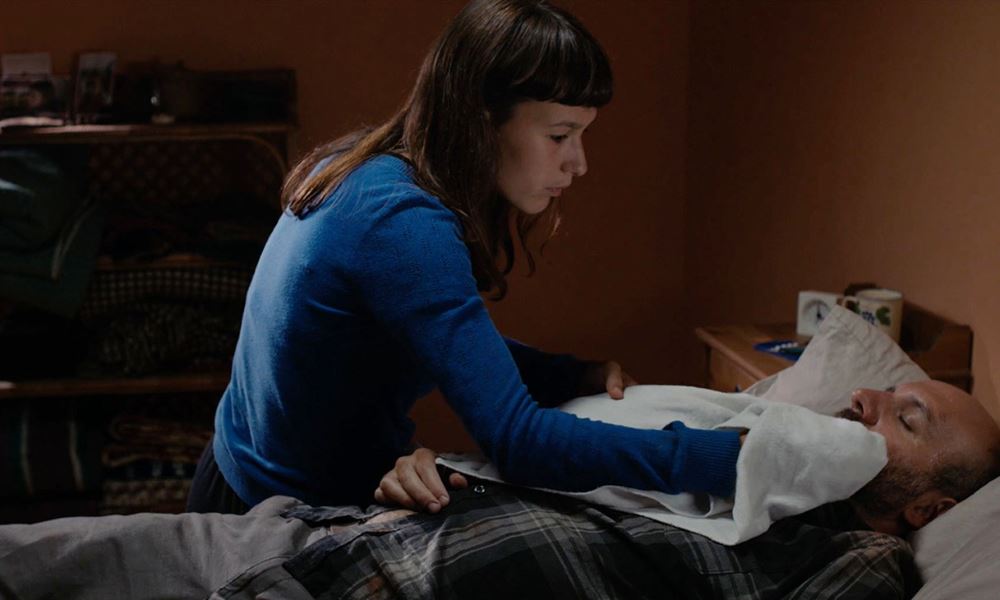 Portugal’s economic crisis is explored through the strained dynamic of a family slowing falling apart in Teresa Villaverde’s austerity drama Colo. You wouldn’t know it by the clothes she wears or the furniture in their well-appointed apartment but the financial crisis has hit Marta’s (Alice Albergaria Borges) family hard. She lives with her mother (Beatriz Batarda) and father (João Pedro Vaz) in a high-rise block on the outskirts of Lisbon. The rooftop provides a breathtaking panoramic view of the city. We first experience it while observing Marta’s father collecting litter abandoned on the rooftop by some construction workers.

It’s a fleeting moment of beauty in an otherwise aesthetically tedious film, but our gaze is ripped away from the city’s colourful skyline by the sight of Marta’s father devouring a half eaten hamburger he finds on the floor. The father has lost his job, and although Marta’s mum has managed to secure some overtime the bills continue to mount up. This isn’t gritty kitchen sink social-realism, or a precipitous fall from grace, but a collective psychological break-down captured in slow motion. The father, paralysed by a sense of inadequacy tries his best to make some money, but his desperation only results in diminishing returns.

Meanwhile, Marta finds solace in her friendship with Julia (Clara Jost) who’s just found out she’s pregnant. Their relationship provide the film’s solitary spark of hope. It’s the light at the end of the austerity tunnel, but it’s extinguished when the mother loses her second job, and the electricity company cut the power. In the dark, both literally and figuratively, the family find themselves defenceless to alienation and estrangement. Striving to find a balance between being overly sympathetic to her middle-class characters and understanding that their precarious situation remains a position of privilege in the current economic climate, Villaverde opts for a cold, calculated style of wide, unobtrusive shots and a sparse taciturn script. This savage detachment is coupled with an understated absurdism.

In one scene Maria’s father accosts an old school friend, then forces him to drive them to a nearby beach where he attempts to mug him. It goes horribly wrong and he’s abandoned, miles away from home, and forced to sleeping rough for two nights before returning home with his tail between his legs. Days of inertia transubstantiated into art, as the family’s financial situation worsens, they become more fragmented, with their roles shifting and each of them withdrawing into their own world – with what remains of their love for one another evidently standing little chance against the grand narrative of Portugal’s crisis. Successfully expressing the numbing alienation of economic hardship, Colo ultimately takes its thesis too far.

Very few questions are asked, with the answers even more elusive, and by the films final act, where a case of mistaken identity between Marta and Julia promises to inject some intrigue into proceedings that too, peters out into nothing. Stretching out over two palpably long hours, this drowsy seance on the ills of neo-liberalism is an intermittently alluring but ultimately dull and unengaging slice of social realism.