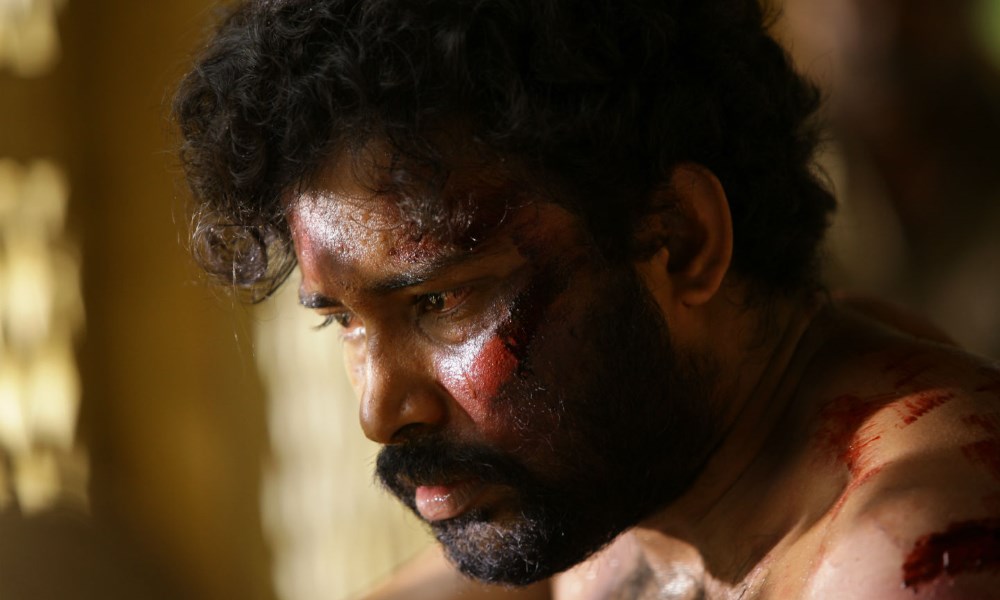 Director Vetrimaaran’s third film is first and foremost about a serious and ongoing problem in Indian civic society, but in the current world climate it’s hard not to draw parallels between the events of Visaaranai and global politics. Inspired by real events, the film explores the breakdown of habeas corpus as lived experience. It is raw, urgent and essential. Pandi (Dinesh) is a homeless Tamil Indian immigrant working in neighbouring state Andhra Pradesh, unable to speak the local language and working 19 hour days at a news stand.

Easy targets for a corrupt police force desperate to close a high profile burglary case, Pandi and his three Tamil friends are picked up on a trumped-up charge and tortured. The brutality of these sequences is astonishing in its ferocity, but it is the playful cruelty of the Police Inspector Ghosh (Vishweshwara Gao) that really stings: in one devastating scene, he tricks them into thinking that they have been released so that they will break their hunger strike. The pressure that Pandi is under to confess and accept a short jail sentence is immense, but he resists at every turn – it’s no coincidence that the park where he sleeps is named after India’s most famous revolutionary.
But Visaraanai isn’t interested in inspirational platitudes, and the scene of their triumphant release – an apparent climax – comes only at around the halfway mark. Reminiscent of the Netflix documentary Making a Murderer, the group’s initial release is only the beginning of their ordeal. Seemingly decent cop Muthuvel (Samuthirakani) secures their release but immediately leans on them for a favour – to abduct auditor K.K. (Kishore Kumar G.), who has been illicitly dealing money for the opposition party in Tamil Nadu. The group’s release signals the end of the simple police brutality plot and the beginning of a convoluted political narrative that expands on Visaaranai‘s themes of power and corruption, but sacrifices narrative economy in the process.

Ultimately, though, this mid-section slump does little to dampen the film’s searing message, and once the final act kicks into gear, emotion, social commentary and political urgency coalesce into brutal focus. But Vetrimaaran reserves his most devastating scene for the end credits: footage of the real-life Kumar (Raj Pradeesh) – who leaves for home after the four are initially released – now a human rights activist, reveals that an estimated 30% of police cases are still closed with forced confessions. For Indian audiences, Visaaranai is a painful examination of corruption and injustice, and for Western audiences a timely reminder that the democratic checks and balances so easily taken for granted can just as easily be swept from under our feet.