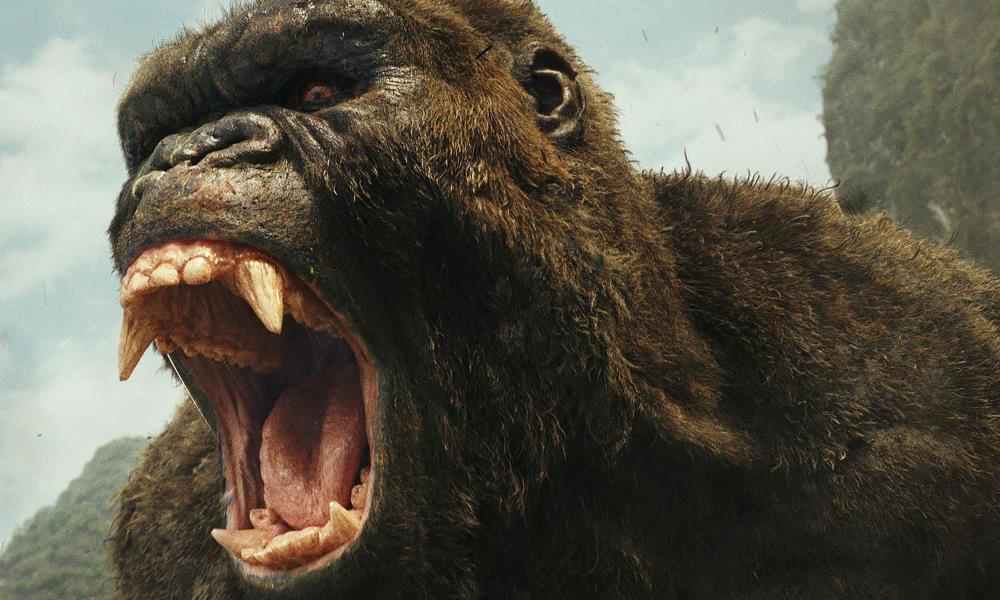 “I’ve taken enough photos of mass graves to recognise one.” The words of Brie Larson’s anti-war photographer, thankfully describing the giant remains of long-dead gorillas rather than the forever-soiled career of herself and her co-stars after a slog on Skull Island. While not quite a terminal misstep for Larson et al, you do wonder how The Kings of Summer director Jordan Vogt-Roberts managed to assemble such an apparently fine cast for a $190 million B-movie – minus the now-kitsch effects of Kong 1933/1976 or the emotional heft of Peter Jackson’s 2005 beast.

The year is 1973 – a point drilled into us almost beyond meaning – and the Vietnam War has reached its conclusion. Fuming away on a Saigon USAF base is Colonel Preston Packard (Samuel L. Jackson), a decorated dog of war disappointed by his country’s capitulation to the Vietcong. Desperate to get back into the action, Packard and his platoon join Mason Weaver (Larson) and former Super Army Soldier James Conrad (Tom Hiddleston) on what they believe to be a Landsat operation to an uncharted island, headed up by the persuasive Bill Randa (John Goodman). However, moments after punching through the tempestuous shroud of Skull Island this motley crew meet its titanic benefactor, Kong – and he’s not expecting visitors.

Far bigger than previous incarnations of The Eighth Wonder of the World – presumably to offer a reasonable challenge to fellow Legendary Pictures stablemate Godzilla in the inevitable grudge match – Kong swiftly dispatches several of the attack choppers, leaving the survivors separated. On one side of the island is loyal grunt Chapman (Toby Kebbell), instructed to guard his Kong-ending weapons payload until Randa, Packard and his men can reach him. On the the other side are Conrad, Weaver and several other characters so poorly-drawn as to elude description. Thankfully, some personality is injected by John C. Reilly’s Crusoe-esque Second World War pilot Hank, stranded on the island since the Battle of the Pacific and in awe of Kong himself. “He’s king around here,” we’re reminded, his allegiance already won in a past encounter.

Suffice to say that Kong isn’t the worst primeval inhabitant that our evermore grating human fodder must evade in order to reach salvation. As with most origin stories destined to be footnotes in engorged “Universe” franchises, there’s little to Kong: Skull Island that isn’t hugely unnecessary or just plainly illogical. Caution should always be taken when branding any film about an 80-foot ape “illogical”, but such is the gross stupidity of the film’s movable feast – and the abominable dialogue spewing from their mouths – that you’ll likely thank the primate deity himself every time one is crushed, impaled or bisected. The only homo sapiens that get off lightly are the token Kong-worshippers, although that is perhaps solely down to their utter vapidness.

Does anything work? As the star of the show Kong certainly is a spectacle, although it’s arguable if this latest incarnation is as impressive as all-but 76’s misguided man in a suit. In addition, much like Gareth Edwards’ puppy-fying of the King of the Monsters, Kong is never particularly threatening to anything other than a giant squid and the film’s dull M.U.T.O.s, the bone-crawlers. Reilly gets a couple of godsent laughs as the archetypal man frozen in time, although his increased prominence as the escape mission draws to an overly-sentimental climax is perhaps a sign of the more family-friendly direction Warner Bros. want to take future monster mashes.