Directed by former photographer Mika Ninagawa, Helter Skelter (2012) is based on the 2003 manga of the same name and tells the story of a model whose faultless beauty and doll like form ultimately becomes her downfall. Nurtured by vanity but driven by greed and success Ninagawa constantly keeps the spotlight on LiLiCo (Erika Sawaiiri) the model and TV celebrity whose story comprises the plot of Helter Skelter.

Constantly in demand to model alluring frocks and sell phallic-shaped food products, LiLiCo has risen to the top of her profession and held up as the epitome of beauty. However, she has a terrible secret, one that if discovered would destroy her carefully engineered public image. As to be expected from a director with a background in photography within the modelling industry, Helter Skelter is beautifully fashioned, with the camera’s erratic gaze so often pulled away to admire the beauty of Ninagawa’s sumptuous cinematography and elegant mise-en-scene. 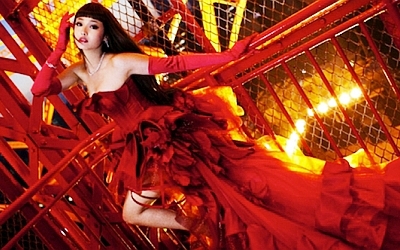 A film almost as beautiful as its protagonist, there’s no denying that Helter Skelter is a remarkably attractive film – simmering with a quiet rage beneath its colourful exterior, however like the models in the story who are described by one character as “like apples, eaten away by bugs from the inside” there’s very little behind this shallow attack on culture’s obsession with beauty. Strikingly beautiful, yet thinly drawn, LiLiCo is little more than a shell of a character, showing no signs of vulnerability, ultimately giving the audience little sympathy for her inevitable fall from grace with no moral redemption to be found whatsoever.

Celebrity obsession has become a running theme in this year’s London Film Festival, from Matteo Garrone’s Fellini-esqe parody of the ‘quick-fix’ rise to fame in Reality (2012) to Brandon Cronenberg’s Antiviral (2012), a chilling dystopian image of a world where celebrity obsession has descended to the point that society pays to become infected by famous illness. This perceived cultural obsession with beauty rather than talent is clearly something which is inspiring modern filmmakers and Helter Skelter is no different.

Ninagawa’s film is far more of an cinematic indulgence – clearly relishing its protagonists demise whilst well aware of the futile nature its hollow message will ultimately have. Undeniably a sensory delight, Helter Skelter is sadly far too chaotic, lacking in focus and little more than a shallow memorandum for the fragility of physical splendour.