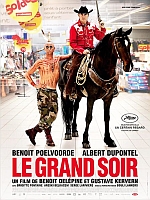 Following last year’s underwhelming Mammuth (2010), directors Benoît Delépine and Gustave de Kervern present their latest oddball comedy Le Grand Soir (2012) in the ‘Laugh’ section of the 56th London Film Festival. Our protagonist is Not (Benoît Poelvoorde), “the oldest punk in Europe with a dog” as he describes himself. Despite his ostensible claims to living a life of freedom, Not gravitates around a single shopping mall on the edge of town where his mother and father own a chip shop, which he consequently visits in order to celebrate his mother’s birthday.

He is joined by his brother, the far more conventional and straight-laced Jean-Pierre (played by Albert Dupontel), who works as a salesman in a nearby mattress shop. Jean-Pierre lectures Not on his lifestyle, but his own suburban life is unravelling and unemployment seems imminent. Jean does himself no favours, penning a drunken resignation and vandalising the shop. In a state of suicidal despair, Jean is rescued by Not and transformed into a punk, taught the punk way of walking and the punk philosophy. Together they decide on sparking a revolution in the shopping centre – their very own Arab Spring, as it were. 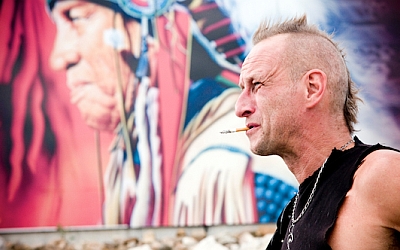 With Le Grand Soir, Delépine and De Kervern have constructed an anarchic and often hilarious comedy. The humour is broad and clownish, with the two brothers ending the film resembling a double act from vaudeville. Particular highlights from the supporting cast include the men’s mother (Anne Fontaine), whose every gesture is accompanied by a flourish, and a cameo from Gérard Depardieu. Yet beneath the more straight-forward clownish elements runs a darker, absurdist humour. When the brothers meet a potential suicide victim, they dissuade him from taking the fatal step simply because his gesture lack panache. “It’s not punk”, they tell him.

Although the world the brothers inhabit seems to be taken from the social realist handbook – a landscape of roundabouts, skips, car parks and the bright aisles of a massive supermarket – yet there are some elements that are conspicuous by their absence. For instance, there are no police. There is no place in France where the police wouldn’t have noted these characters down and incarcerated them multiple times – and this isn’t simply a problem with credibility. Punk – as a movement – needs the police as a necessary defining element, and in their absence there is little sense of opposition.

Perhaps the absence of authority was an intentional move by Delépine and de Kervern, the point being that we are supposed to see the two brothers as Don Quixote-esque characters, tilting at the windmills of oppression – if this is the case, Le Grand Soir is, in fact, not about the punk lifestyle at all, but a gently conservative comic farce.Whatever its grand intentions, there’s no denying that the French directorial duo’s unique sense of humour will (rightfully) bring them plaudits.