Inspired by a true story of almost unbelievable magnitude, The Way Back (2010) marks Peter Weir’s return cinema after a seven year hiatus following his 2003’s historical romp, Master and Commander: The Far Side of the World.

Taking place in 1940, The Way Back sees a group of men escape from the Siberian Gulag and journey on foot to India against impossible odds, crossing both the Gobi Dessert and The Himalayas. Near the film’s beginning the prisoners of the Gulag are informed that their real prison is the unforgiving nature of the landscape in which they are held. 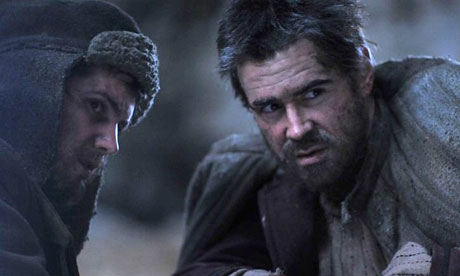 This is no Shawshank Redemption (1994) however; Weir is keen to keep us at an emotional distance that many audiences may struggle with. We are not aligned with the characters in their plight in a manner we may have come to expect from this kind of escape and survival story, of which there are many standout examples – Jean Renoir’s La Grande Illusion (1937) and Robert Bresson’s A Man Escaped (1956) both spring immediately to mind. In contrast, Weir’s vision is one born out of reverence, which is clearly seen in his dedication of the film to the story’s three principle survivors.

Although the distance we maintain from the film’s characters does leave The Way Back feeling a touch underwhelming as a piece of entertainment given its monumental scale, it works greatly to the film’s credit as a sturdily crafted work of cinema that successfully avoids the all too inviting pitfall of over-sentimentality often writhe in narratives of this kind.

Not one bit short on acting talent, with solid performances from Mark Strong, Jim Strugges, Colin Farrell, Ed Harris and Saoirse Ronan – whose continuing brilliance appears to have been born to grace the screen – The Way Back is a hefty cinematic experience set against the vast vistas of history that may not have you cheering on its heroes at every turn, but that will enthrall you in their epic journey nonetheless.