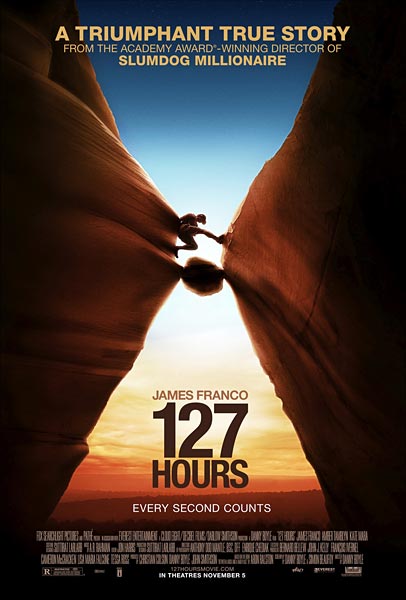 Foresight is a wonderful thing. With the gift of foresight, British director Danny Boyle – perhaps best known for the cult classic Trainspotting (1996) and 2008’s Academy Award-winning, feel good hit Slumdog Millionaire – would probably have thought twice before choosing to adapt Alex Garland’s novel The Beach (2000), a spectacular flop both critically and commercially and perhaps the single black mark against an otherwise sparkling resume.

In Boyle’s latest film 127 Hours (2010), trapped mountain climber Aron Ralston (James Franco) – pinned to a canyon wall by an dislodged boulder for six days – also wrestles with the concept of foresight, even transcending into fatalist territory as he questions whether his entire life has been leading up to this “life or death” scenario. Boyle has insisted that 127 Hours is a film predominantly concerned with the survival of hope against adversity, and it is this focus on the concept of “mind over matter”, as well as its striking, graphic on-screen depiction, that helps 127 Hours supersede the overly lauded Slumdog in terms of cinematic value and emotional payoff.

127 Hours follows the true story of Aaron Ralston, an incredibly energetic young mountain climber who finds himself literally caught “between a rock and a hard place” (incidentally, also the title of Ralston’s hugely successful book) as a fallen boulder crushes his arm against the wall of a narrow, sunless crevice somewhere in the spectacular expanses of Blue John Canyon, Utah. Famously, Ralston remained trapped in the canyon for nearly 6 days (or, more precisely, 127 hours) before sacrificing his lower right arm in return for freedom, using a small, dull pocket-knife.

You’d be forgiven for expecting Boyle to build his film around Ralston’s gruelling self-amputation, but the use of the term “torture-porn” in relation to 127 Hours from certain voices of dissent within the media ultimately prove to be misguided. Boyle – who once again teams up with Slumdog screenwriter Simon Beaufoy, as well as cinematographic duo Anthony Dod Mantle and Enrique Chediak – spends far more time exploring the psychological impact that the ordeal has on Ralston, than the physical. 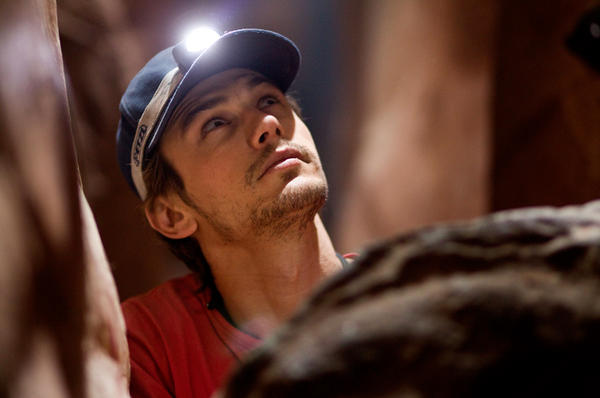 With Trainspotting, Boyle succeeded in graphically visualising both the emotional and physiological effects of heroin addiction. In 127 Hours, addiction remains a common theme, but the focus has now shifted onto an unapologetic adrenaline-junkie. The film’s ultra loud, highly frenetic introduction – a composition of split screens, “Dutch angles” and rock music – perfectly places us within Ralston’s thrill seeking lifestyle. His passion and exuberance quickly become infectious, and he even succeeds in charming two attractive female hikers within hours of arriving at Blue John (whether or not this incident was the product of Ralston’s “artistic licence” is debatable).

Ralston’s time in isolation is divided between the seemingly futile act of chipping away at his boulder-captor with his pocket-knife and moving through various, significant memories from his life, ranging from childhood flashbacks through to intimate liaisons with his ex-girlfriend. As Ralston’s physical and mental state deteriorates, there is even time for bizarre, surrealist Billy Liar (1963)-esque flights of fancies, including sporadic hauntings courtesy of an inflatable Scooby-Doo (?!) and a sequence where Ralston imagines himself as both host and contestant in a game show. Rest assured, these all make relative sense in the context of the film, and Franco is a genuine revelation as Ralston, revealing previously-unseen levels of comic ability, emotional dexterity and pathos.

It is to Franco’s credit, and of course Boyle’s, that we remain emotionally engaged with Ralston throughout, with Franco’s performance rivalling that of Ryan Reynolds’ in Buried (2010), in terms of “watchability” within the restrictions of a confined space. With leading roles in three of this year’s most anticipated films (Franco also plays the lead role of iconic Beat poet Allen Ginsberg in biopic Howl [2010] and Rise of the Apes [2011]) the US actor’s future certainly looks to be a bright one.

127 Hours is not only Boyle’s best film since Trainspotting, but is also one of the most emotionally rewarding films seen in recent years. Remarkably, the film’s short, intense scene of amputation somehow manages to evoke both repulsion and a sense of relief, in near-equal measures. Every bone broken and nerve cut is a step towards freedom for Ralston, and the audience (rightfully) are asked to endure the pain with him. This extremely intimate moment is neither perverse nor bloodthirsty, but instead sets the wheels in motion for one of the most genuinely spine-tingling, cathartic endings in recent years, rounded off in style by Boyle with the pitch-perfect use of the anthemic track Festival, from Icelandic musical genii, Sigur Ros.

Alongside The King’s Speech (2010), Black Swan (2010) and the Coen Brothers’ upcoming remake of the classic John Wayne western True Grit (2010), 127 Hours looks like being one of the major success stories at this year’s upcoming Academy Awards. Less contrived, yet with all the heart of Slumdog, 127 Hours is an exceptionally made film, and further proof (if proof be needed) that Boyle is emerging as one of the most distinct directorial voices in contemporary cinema.