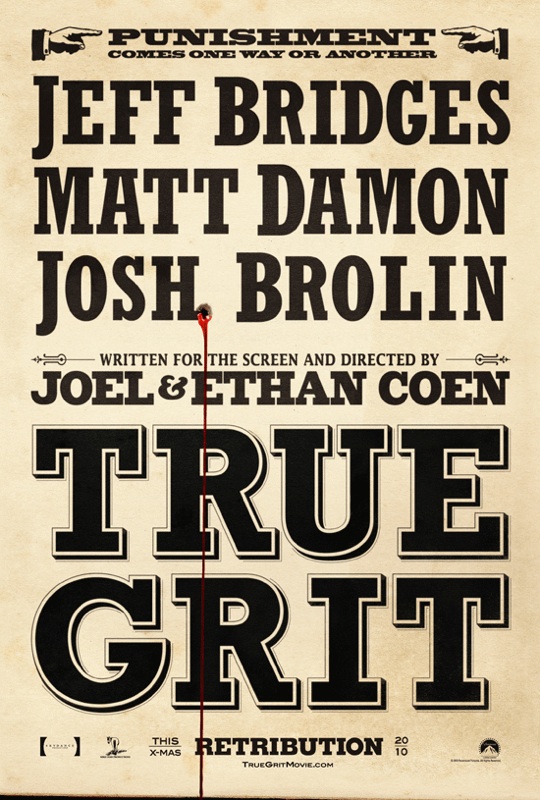 American writer Charles Portis’ 1968 revisionist Western novel True Grit is an incredibly tight, well paced and highly cinematic thriller, so it came as little surprise when the text was originally adapted for the silver screen by director Henry Hathaway in 1969, just a year after the book was first published.

Featuring John Wayne in the pivotal role of drunken, trigger happy US Marshall Reuben “Rooster” Cogburn (which secured for Wayne the ‘Best Actor’ award at the 1970 Academy Awards), Hathaway’s True Grit (1969) is now seen as one of the key texts of the period and of the dwindling Western genre as a whole.

Hoping to reignite audience interest in the Western (and succeeding if impressive US box office takings are anything to go by) comes the second adaptation of Portis’ beloved novel, this time courtesy of indie filmmakers-come-Hollywood darlings Joel and Ethan Coen. What we get is a more faithful, near-pitch perfect adaptation of the original text which narrowly misses out on being classifiable as a Coen classic.

True Grit (2010) follows the story of headstrong 14 year old Mattie Ross (impressive newcomer Hailee Steinfeld), who sets out on a mission to bring to justice cowardly outlaw Tom Chaney (Josh Brolin), the man responsible for recently murdering her father in cold blood. On arriving in town, Mattie manages to procure the assistance of Rooster Cogburn (Jeff Bridges), a notoriously wild US Marshall whom she believes has the necessary ”grit” needed to help capture Chaney and bring him in for hanging. Also on Chaney’s trail is dandy Texas Ranger LaBouef (Matt Damon), who has motives of his own for hunting the man down. An uneasy alliance is thus forged between the three as they set out into the vast expanse of the Choctaw Nation to find the miscreant.

The first thing to say is that True Grit looks fantastic. Long time Coen collaborator Roger Deakins once again presents a masterclass in cinematography, effortlessly capturing the vast expanses and sporadic changes in climate and landscape as depicted in Portis’ written description of the Choctaw Nation, with the plains and forests of Texas and New Mexico proving to be the perfect substitutes. The superb visuals are further augmented by Carter Burwell’s original score, which utilises a number of generic tropes whilst at the same time producing something fresh and immediately identifiable with the film. 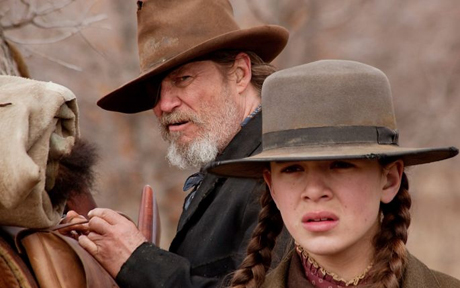 As with the majority of films produced by the Coens, the central performances from Steinfeld, Bridges and Damon are all extremely good. Steinfeld richly deserves her ‘Best Actress’ Oscar nod for her assured depiction of Mattie, a young girl thrown (or, more accurately thrown by herself) into a world of murder, deceit and uncompromising violence. In addition, Damon’s LaBouef is a vast improvement on Glenn Campbell’s wooden effort in Hawking’s 1968 film, moving between arrogant egotist and honourable lawman with visible ease.

However, it is Jeff Bridges’ turn as the whisky-soaked gunslinger Cogburn that for me is the stand out feature of the film. In what seems an ironic twist of fate, Bridges’ performance here arguably exceeds that of Colin Firth’s as George VI in The King’s Speech (2010), yet it appears inevitable that Firth will walk away with the ‘Best Actor’ award at this year’s Academy Awards – a direct reversal of last year’s result, where Bridges won the prize for his role as washed-up country singer Bad Blake in 2009’s Crazy Heart, despite Firth’s superior performance in Tom Ford’s A Single Man (2009).

True Grit does, however, fall short of being laudable as a Coen brother’s classic. Although extremely faithful to Portis’ original text, the warmth and heart of the novel feel somewhat absent at times. In addition, less is made of Cogburn’s dubious past acquaintances with men on the other side of the law, and Brolin seems somewhat underused in his brief appearance. True Grit is undoubtedly one of the Coen’s “serious films”, but still lacks some of the organic Coen humour that the brothers manage to instill into their best efforts, Miller’s Crossing (1990), Fargo (1995) and No Country for Old Men (2007).

Worth the price of admission alone for Bridges’ lock jawed quips (“Them men wanted a decent burial, they should have got themselves killed in summer”), True Grit will hopefully have the commercial clout to drag the Western back into mainstream cinema, succeeding where other, arguably superior films such as Unforgiven (1992), The Proposition (2005) and The Assassination of Jesse James by the Coward Robert Ford (2007) have ultimately failed.