The Change-Up (2011) is a buffoonish comedy starring Ryan Reynolds, Jason Bateman and is directed by David Dobkin, the man responsible for bringing us Wedding Crashers (2004) and Shanghai Knights (2003). The film relies on the unoriginal MacGuffin of a ‘body-swap’ between two friends, Mitch (Reynolds) and Dave (Jason Bateman), who over the years have drifted apart and now lead very different lives.

Mitch is an atypical man-child – the only role Reynolds has ever really been known for – who has strings of women, is barely employed and generally dodges any form of actual responsibility. Dave, on the other hand, is an overworked lawyer, happily married to wife Jamie (Leslie Mann) and a father of three. They both believe the other has it all and low-and-behold, after a night on the town and a group urination session in a fountain (which makes the magic work?), they wake up to find they have swapped bodies. Now they have to find a way to get back into their own bodies without doing too much damage to their real lives.

The body-swap is a far from original concept and has never really worked. Freaky Friday, both the original and the remake, relied on this awful and downright lazy plot device and so does The Change-Up. The film brings nothing new and its comedy is the laziest, broadest order. 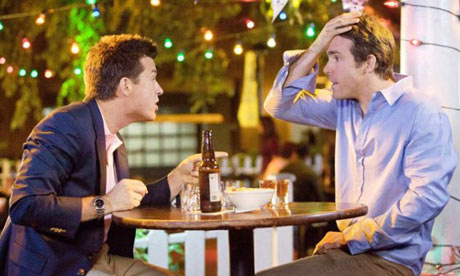 After the initial tired jokes surrounding ‘freaking out’ and having to lead one another’s lives, there is the clichéd realisation that the grass is in fact not greener on the other side. You can also see every single new plot development coming from a mile off, which is always irritating.

One shouldn’t be too surprised about the abject nature of The Change-Up when you look at both the cast list and director. Reynolds has already flopped this year with the appalling Green Lantern (2011), which failed to either recoup costs or entertain audiences, and Bateman’s role in Horrible Bosses (2011) was as catastrophic as Mitch is in this production. Dobkin also does nothing here to suggest he is capable of producing anything remotely original or amusing.

The Change-Up is further evidence of Hollywood’s need to up its game and stop producing not just mediocre comedies, but also terrible, derivative films. To be fair, Reynolds tries and if you find him or this sort of teen-bop movie appealing, you may find something to enjoy. If you’re repulsed by both, I suggest avoiding Dobkin’s latest effort like the plague.