No, this is not an in-depth look at the daily running of one of Britain’s top broadsheets, though that may have been more satisfying than The Guardian (1990), The Exorcist (1973) director William Friedkin’s demonic take on Mary Poppins. Starring that most British of actresses Jenny Seagrove as the nanny from hell, with Dwier Brown and Carey Lowell as the young couple who unwittingly hire her to look after their baby son, this would be chiller with heavy druid overtones, ultimately fails to raise much more than a mild shiver.

Phil and Kate (Brown and Lowell) have just moved to LA and, due to their demanding careers, decide to hire a nanny to look after their new born son Jake. After the young girl they decide upon mysteriously fails to turn up, they are relieved when the seemingly prefect Camilla (Seagrove) appears on their doorstep. Camilla instantly bonds with Jake and things seem fine until Phil and Kate’s neighbour Ned (Brad Hall) takes a shine to her. After she spurns his advances Ned follows Camilla on her evening off, but soon wishes he hadn’t when he discovers that she has some rather nasty nocturnal habits involving an ancient tree in the local woods. With Ned missing, Phil and Kate discover their new nanny has plans for Jake which don’t involve taking him for a walk in the park. 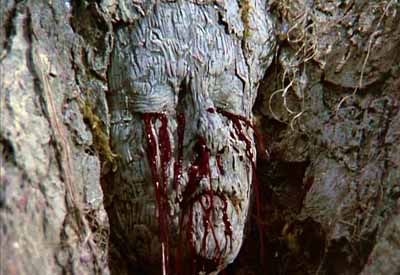 The problem with The Guardian is that though all the ingredients are there, they fail to come together in the final mix. The demonic nanny sent to ‘look after’ the child (complete with savage dogs to back her up), is straight from The Omen (1976), whilst a tree whose roots do its dirty work is reminiscent of the infamous vegetation attack from The Evil Dead (1981) – as is the final chainsaw attack against the said tree. However where those earlier incarnations of evil worked by utilising the less is more approach, Friedkin gives us too much (blood, guts, and levitation) too late.

For once, the DVD extras are almost as good if not better than the actual film. Besides interviews with Seagrove and co-writer Stephen Volk, there is also fascinating input from Friedkin himself, discussing his memories of the film, as well as his take on the essence of horror. Possibly scarier than The Guardian, this alone would make ideal Halloween viewing.