The Escape Artist (1982) is another title rereleased this week from Francis Ford Copolla’s Zoetrope production company. Directed by cinematographer Caleb Deschanel, the film is yet another of Zoetrope’s casualties that failed to find an audience at its theatrical release, despite some initially positive critical reviews. Given that it was pitted alongside the likes of Rocky III and Annie, it’s easy to look back and see why the film had a hard time which is a shame because The Escape Artist is a charming B-movie that deserves some attention on DVD rather than being forgotten altogether.

Deschanel’s film explores son’s inadequacies to their successful fathers. Its two leads, Danny Masters (Griffin O’Neal), the son of a late great escape artist, and Stu Quiñones (Raul Julia), the son of the town’s corrupt mayor, meet when Danny hotheadedly picks Stu’s pocket and takes a wallet full of his father’s dirty money. Moving between the present day and the events leading up to it, The Escape Artist shows the two exploiting one another and working together to get what they want, in order to prove themselves to their respective fathers. 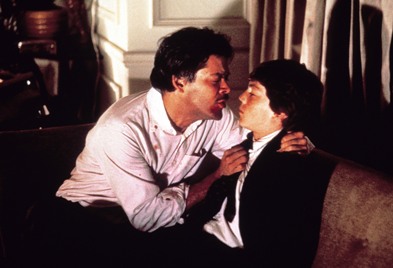 The dynamic between Danny and Stu bring out some of the film’s most enjoyable and comedic moments. Even though their relationship closely follows the ‘odd couple’ mould (Danny is a teenager who thinks like an adult and Stu is an adult who thinks like a teenager), when taken lightly the duo can be very entertaining to watch. The same can be said of The Escape Artist as a whole; taken lightly, its all good fun, but come in with any greater expectations and it appears quite unremarkable.

Strangely enough, the film most comparable to The Escape Artist is Martin Scorsese’s Goodfellas (1990). Both films are similar in terms of their visuals and pace, but when Danny’s voiceover is heard to set up the film’s exposition (with a very similar accent to Ray Liotta’s Henry Hill), it feels as if The Escape Artist could be a Goodfellas alternative cut – what would have happened if Hill had thought “Screw the wiseguys, I’m gonna be a magician”.

Just as Hill falls in with Fatty Arbuckle’s Italian cousins, watching Danny lapse into crime is the most entertaining plot strand in the film. Nothing in The Escape Artist should be taken past face value because it isn’t much more than a fun, simple ‘odd couple’ story. However, it would be well worth finding a copy of it on DVD before it’s out of print, as at its best – when Danny and Stu are on-screen together – The Escape Artist is immensely enjoyable.