Despite accruing an impressive array of film festival credits, director Darragh Byrne’s feature debut Parked (2010) is unable to compare in ambition or quality to recent notable Irish efforts such as In Bruges (2008) or this year’s The Guard. All to often finding itself on the wrong side of whimsical mawkishness, the film follows the newly homeless Fred (Colm Meaney) who returns to Dublin from England with nowhere to live except his car.

Seemingly trapped in a local seaside car park, Fred is soon ‘gifted’ with a new neighbour in the form of 21-year-old dope-smoking runaway Cathal (Colin Morgan), who nonchalantly parks up beside him. After some initial uneasiness, the two quickly become friends and set about taking care of the basics – in this case, finding a place to regularly wash, resulting in frequent excursions to the local swimming pool.

At the pool – and encouraged by Cathal – Fred meets attractive Finnish music teacher Jules (Milka Ahlroth), yet is too embarrassed to reveal his destitution. As Cathal’s drug addiction escalates to new extremes, Fred is forced to act in order to protect those closest to him. 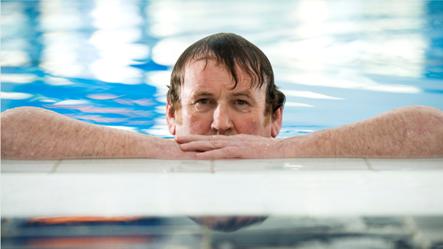 Parked comes equipped with a neat, timely central premise about an everyman pushed to the boundaries of poverty by both society’s legal restraints and the economic downturn. We spend time in dole queues, benefit offices and community halls as Fred desperately tries to piece his life back together following a disastrous spell in England. There is even an interesting side-story involving a local newspaper who want to highlight Fred’s plight in exchange for aid, readable as a subtle dig at the media’s voyeuristic relationship with the impoverished.

However, despite such a strong concept, we never get a true sense of what Byrne wanted to accomplish with Parked. Meaney’s Fred is an affable-enough protagonist, yet seems unable to express his discontent past an occasional shrug of the shoulders or a whispered expletive. One can’t help but feel that a more versatile actor – perhaps even a Brendan Gleeson – would have been able to imbue slightly more feeling and frustration in regards to his lowly situation. Morgan’s turn as Cathal is perhaps the standout performance, yet even this role is riddled with drug addict cliches.

What could have been a Shane Meadows-esque, quirky tale of the human spirit and its ability to triumph against adversity ultimately reveals itself to be a flat, by-the-numbers drama. Whilst Meadows has the ability to make the everyday seem extraordinary, with Parked, Byrne turns the ordinary into the inconsequential.