The 15th annual UK Jewish Film Festival opened in style last night with a special gala preview of Il Divo (2009) director Paolo Sorrentino’s latest effort This Must Be the Place (2011), starring Sean Penn. Nominated earlier this year for the coveted Palme d’Or at Cannes and receiving its UK premiere at LFF, Sorrentino’s quirky drama impresses in parts, but feels unsatisfyingly (and intentionally) off-the-wall for large stretches.

Oscar winner Penn plays ageing rock star Cheyenne, a man-child recluse residing in an Irish country mansion with his devoted, firefighting wife (Frances McDormand). Cheyenne enjoys (although this would undoubtedly be the wrong word for the borderline depressive Robert Smith-alike) an uneasy relationship with the local community as a whole, and things are further complicated by the news that his estranged, Holocaust survivor father – who remained in the US – is close to death.

Arriving post-mortem, Cheyenne finds himself in the unlikely role of Nazi hunter as he attempts to track down former SS Officer Aloise Lange, who tormented his father during his time in Auschwitz. It is perhaps at this point that Sorrentino’s pervading leftfield sensibilities transcend into seemingly knowing indie ‘kookyness’. 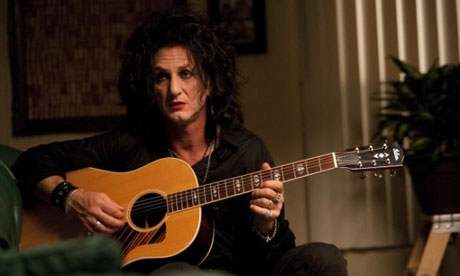 Penn is undeniably impressive in the central role, fleshing out a character that could so easily have descended into stale caricature. The rest of the cast (with the exception of an underused McDormand) do not fare so well.

Judd Hirsh’s ‘Nazifinder General’ Mordecai Midler functions as a broad, one-dimensional cipher for the stereotypical Holocaust-obsessed Jew, and only fleetingly questions what his destructive single-mindedness has achieved outside of simple revenge. Sorrentino’s obsession with Talking Head’s frontman David Byrne also threatens to run away with the film at points, and his cameo is at best misguided, and at worst clumsy.

This Must Be the Place is ultimately saved by some hugely enjoyable artistic flourishes, stunning cinematography and Penn’s commanding central performance. Cheyenne is far from the best-written role Penn has been handed during his illustrious career, yet somehow succeeds in making a mountain out of a molehill.

Sorrentino should be praised for approaching difficult subject matter (familial fractures, the Holocaust etc) in a relatively original and innovative way, however This Must Be the Place falls short of its Palme d’Or-nominated brethren on a number of crucial levels.

Trailer courtesy of Yahoo! Movies. This Must Be the Place will be distributed by Trinity Films.