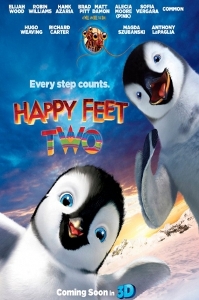 Mumble the penguin (Wood) has grown up and now has his own son Erik (Acres), who proves to be as difficult to deal with as Mumble was when he was young. The trouble is Erik won’t – or can’t – dance (an apparent prerequisite for any penguin appearing in these films). But this proves the least of Mumble’s problems when his young son meets the Mighty Sven (Azaria) a penguin who can fly – mainly because Sven is actually a puffin (a fact which no one has taken the time to explain to him).

It takes the usual family misunderstandings, running away from home and eventual reuniting of Erik and his parents (along with Mumble and his friends saving their entire penguin colony from the impending effects of global warming) to bring the whole show to a toe-tapping finale. 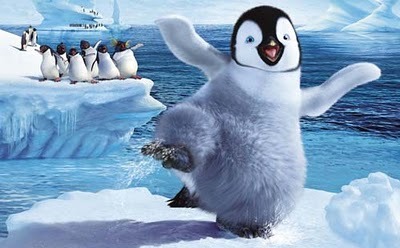 Let’s get the preliminaries out of the way. The main characters – namely the penguins – are tedious. This second Happy Feet outing seems to think that modern audiences (and penguins) have only heard of rap, hip-hop or house beats – which may be true for the film’s core audience of pre-pubescent kids, but rules out anyone older than 10-years-old, or with even a modicum of musical appreciation.

The other problem is the lack of any real story, the premise seemingly involving the main character’s racing back and forth across the ice in an effort to avert the impending apocalypse.

Fortunately, two redeeming features make Happy Feet Two just about tolerable. The Krills Will and Bill (Pitt and Damon) are a sheer joy as a Laurel and Hardy-esque comic duo. Their constant bantering and obvious fondness for each other is perhaps the only thing worth remembering. Let’s just hope that if there is a third film, the Krill brothers take centre stage, and the penguins are banished to the chorus-line.