Director Brad Bird is perhaps best known for Pixar efforts The Incredibles (2004) and Ratatouille (2007), but has now turned his hand to live action filmmaking as he directs Tom Cruise (who recently announced the possibility of a sequel to the 1980s classic Top Gun) and home grown comic talent Simon Pegg (soon to reprise his role of Scotty in the as-yet-untitled Star Trek 2) in Mission: Impossible – Ghost Protocol (2011), the fourth instalment in the series.

When the Kremlin is attacked, the IMF (the ‘Impossible Missions Force’, not Christine Lagarde’s International Monetary Fund – more’s the pity) is blamed for the bombing forcing the closure of the organisation. In reaction to the events, Ethan Hunt (Cruise) and his band of attractive and not-so-attractive teammates go rogue in order to clear their names.

John Woo’s Mission: Impossible II may have been abhorrent back in 2000 (and the less said about J.J. Abram’s Mission Impossible III [2007] the better), but they both made money. There’s only one way to describe this latest cash-in – ‘popcorn’. That is to say: light, fluffy, full of hot air, no nutritional value and a mark up that would make a Russian oil tycoon blush. 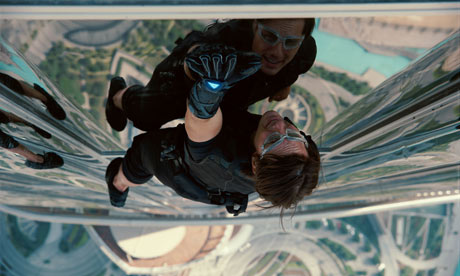 Ghost Protocol is at its most interesting when it abandons its farcical plot entirely. The moments when Ethan is driving pretty cars, shooting things or falling off the tallest (and therefore the best) building in the world – the Burj Khalifa in Dubai in a specially shot 10 minutes IMAX sequence – are what grab your attention.

Pegg plays his role as the lovable English geeky scamp well, yet the rest of the supporting cast are tiresome and dry. The occasional nod to the previous films (including Brian De Palma’s excellent Mission Impossible) is irritating and obvious. Any sense of mystery the film endeavours to kindle is erroneous.

Ghost Protocol is action fluff, and on that level alone it works well enough. There is a distinct odour of the original 1960s TV series with its light camp quality. Had this been heightened and any attempts to play it serious been dropped, the film would have been better. Ultimately, what Hollywood needs to realise is that you can’t just keep regurgitating the same movie – it is boring to watch and no doubt boring for directors to make.

See below for exclusive video coverage of the Mission: Impossible – Ghost Protocol UK premiere courtesy of our friends over at The Big Picture. Follow them on Facebook and Twitter.