Set during the reign of King Christian VII, this rich and sweeping drama explores the radical reforms that were introduced in Denmark at the time, enabling it to become one of the foremost enlightened countries in Europe at the time. Young British noble Caroline Mathilde (Vikander) is married off to Christian VII (Følsgaard) and soon produces an heir; yet all is not well in the marriage due to the erratic and disturbing behaviour of the mentally-unstable King. 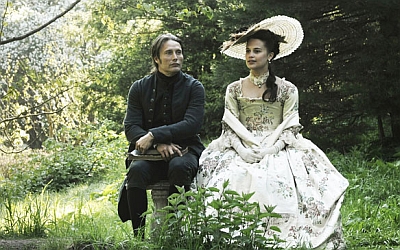 Before long, a doctor is appointed by the court – child of the Enlightenment Johann Friedrich Struensee (Mikkelsen) – who quickly earns the King’s friendship and trust, allowing him to implement his modern ideas. Impressed by Struensee’s forward-thinking ways, Caroline soon falls in love with the doctor – but as their love blossoms, they realise their actions may have terrible consequences for the country.

The key to A Royal Affair’s success is undoubtedly its straightforward approach. There is nothing radical about the way the film has been made, its strengths instead lying in a combination of elements that come together to make a tight, enjoyable and entertaining film. The ever-watchable Mikkelsen gives a strong and very believable performance as Struensee, balancing both the romance and political side of his character. Vikander is also noteworthy, though ultimately the star of the film is Følsgaard and his strangely charming performance as the mad King of Denmark (for which he won the Best Actor prize). Of further merit is the excellent script which also won a Silver Bear in Berlin, peppered with light humour and captivating dialogue.

The absorbing story of this most royal of love triangles is set against the drama of the historical events of the Enlightenment. It’s a storytelling device that provides balance and pace to a film that is capable of being simultaneously gripping and thought-provoking.

With high production values that truly help to recreate and reinforce this most tumultuous era, Arcel’s A Royal Affair avoids being a mere bodice-ripper, transcending clichés to create an immensly enjoyable and intelligent period romp.