As ham acting goes, Ghost Rider: Spirit of Vengeance (2011) is a big fat hog roast with a side order of crackling. Nicolas Cage returns as Johnny Blaze/Ghost Rider, cranking up his patented nervous ticks and wide maniacal eyes to 11, but we’ve seen it to many times and he is now officially tap dancing on the edge of self parody. You can also usually count on Ciarán Hinds to deliver the goods, but his Prince of Darkness is a gurning middle-aged man rather than a fearsome supernatural force.

If this was a parallel universe, Johnny Whitworth as antagonist Carrigan/Blackout would have picked up the Devil’s slack and provided The Rider with a worthy adversary, but unfortunately in this universe, Whitworth is incapable of squeezing out a single drop of menace – but to be fair, his character is underdeveloped and severely lacking in screentime. The only saving grace on the acting front is Idris Elba’s Moreau, a drunken French holy man who possesses superhuman powers. Who he is and how he acquired these powers is never explained, but Elba’s charisma carries him through. 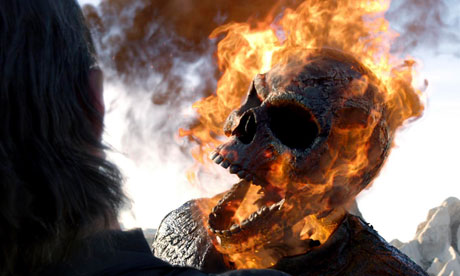 The dynamic directing duo of  Mark Neveldine and Brian Taylor manage a couple of nice set pieces, but they have editing issues and the stunts and special effects are low on spectacle – although it has to be said that The Ghost Rider himself looks excellent and is a vast improvement on the first film.

Yet despite a mountain of flaws, Ghost Rider: Spirit of Vengeance is just about entertaining in a ‘so bad it’s good’ kind of way. You may find yourself infinitely more forgiving of its lack of quality if you pretend it’s simply a low budget Troma flick rather than a multi-million dollar studio picture.

In a year of massive comic book movies such Christopher Nolan’s The Dark Knight Rises, Joss Whedon’s The Avengers and Marc Webb’s The Amazing Spider-Man, Ghost Rider: Spirit of Vengeance will be quickly forgotten, but if you’re in the mood for 90 minutes of mindless nonsense – Cage is your man.