Film Review: ‘Man on a Ledge’

Starring Sam Worthington, Elizabeth Banks, Jamie Bell and Kyra Sedgwick, Asger Leth’s Man on a Ledge (2012) is a thriller with a twist. High above Manhattan’s mid morning traffic, Nick Cassidy (Worthington) is a man on the edge – literally, as he is about to throw himself from a 200ft ledge to the street below. However, as police negotiator Lydia Mercer (Banks) arrives to try and coax him from the brink, it emerges that all is not as it seems, and something even bigger is going down behind the scenes.

Man on a Ledge is as much a psychological thriller as it is an action movie. The relationship that Banks’ Mercer builds with Worthington’s Cassidy as she discovers just who he is and why he’s apparently willing to take his own life is every bit as important as what’s taking place across the street, and the juxtaposition of the parallel storyline – whilst far from being original – at least manages to hold your attention for the film’s duration. 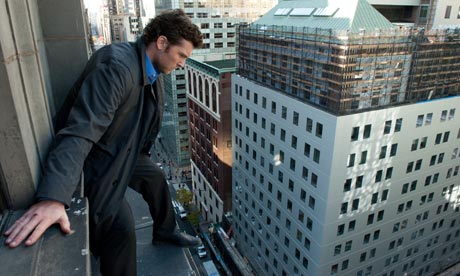 The psychological aspect is further seen in the reaction of the crowd who gather on the street below to watch the unfolding drama. With TV cameras following a reporter out for her big scoop (a feisty performance from Sedgwick as a Gail Weathers-esque newsgirl), the film can also be seen as a comment on modern societies obsession with the immediacy of the here and now and reality television, of which a live suicide would be the pinnacle.

That said, there’s no shortage of high-octane action. Filmed on location at the Roosevelt Hotel on New York’s Madison Avenue, the scenes set up on the ledge 200ft above the midtown traffic have a giddy air of authenticity, due in no small way to the fact that it was real. In a recent interview, Banks stated that Worthington really did step out onto the ledge, so perhaps he isn’t having to act too much to look petrified.

The parallel story featuring Bell and Genesis Rodriguez (no spoilers here) is equally impressive though, without giving too much away, some of the predicaments the couple find themselves facing do smack of Tom Cruise’s early difficult assignments. Though hardly taking the action thriller to new heights, Man on a Ledge certainly provides some genuine, vertigo-inducing fun.