Having committed the apparent cardinal sin of never reading Charlotte Brontë’s classic novel of the same name (in full, at least), Cary Fukunaga’s Jane Eyre (2011) – starring Mia Wasikowska and Michael Fassbender – serves as a fine re-introduction to the text, served up with some truly impressive cinematography and an intriguing chronologically non-linear approach.

Jane Eyre is the story of a young woman who, as a child, lived with a cruel aunt and was subjected to physical and emotional abuse. Upon being sent to Lowood School for Girls to atone for her behaviour, Jane (Wasikowska) finds friendship and a strength that helps her blossom into a mature young woman, leading to her finding work as a governess at Thornfield Hall. It is here that Jane meets Master of the House Mr. Rochester (Fassbender), and from thereon one of literature’s most famous, romantic entanglements ensues. 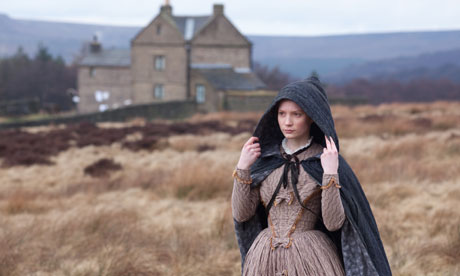 Adriano Goldman’s sublime cinematography achieves an empathetic quality by framing shots of the pastoral-coloured landscape smothered in varying light, evoking a sense of a place where coldness rules and warmth struggles to surface. The film’s choice of location, combined with Goldman’s shot selection, is one of the major reasons why Fukunaga’s film is such a respectful depiction of Brontë’s text, whilst also offering up a piece of contemporary artistic splendour.

It is also thanks to an array of fine performances from Jane Eyre’s largely female cast, combining with Fukunaga’s fine direction, that helps to deliver such a respectful and powerful adaptation of Brontë’s novel. The slight nuances of Amelia Clarkson’s facial expressions as the young Jane convey enough pain to tell the story of the protagonist alone, with Wasikowska’s maturing Jane naturally carrying this on, as well as adding an air of stoicism to the part.

Both actresses deliver heart-wrenching portrayals that bring a real authenticity to the role of Jane, and are supported by strong British support in the form of Dame Judi Dench as the big-hearted Ms. Fairfax, Jamie Bell as St. John Rivers, and Fassbender as Rochester. However, Fassbender’s portrayal of Rochester is, on occasion, a little forced, in particular during the moments where emotions run high between himself and Jane – yet for the most part, his performance is solid.

Fukunaga’s astute direction, complemented by Moire Buffini’s screenplay and a fantastically strong cast, make this latest adaptation feel fresh and full of new life. Brontë’s established, canonised romantic classic – once exclusively adored by middle-aged mums – has once again been made accessible to a younger audience on a larger scale.