There has been a sudden resurgence of interest in the unique cinema of Greek auteur Theo Angelopoulos since his tragic death earlier this year. His films are notoriously an acquired taste and, despite having a Palme d’Or and numerous other feted awards to his name, is rarely mentioned in the same breath as fellow masters such as Andrei Tarkovsky. Yet Artificial Eye’s beautiful and comprehensive collections – including latest addition The Theo Angelopoulos Collection Vol. 3 – will hopefully introduce the filmmaker’s distinctive and often difficult work to a wider audience.

This third edition collects some of Angelopoulos’ most renowned work, including the 1998 Palme d’Or winner Eternity and a Day. Starring best-screen-Hitler Bruno Ganz, the film details the friendship between a dying writer and a little boy, an illegal immigrant from Albania. A profound meditation on time and mortality, this is probably the most celebrated of the filmmaker’s work and a hypnotically executed piece of cinema. 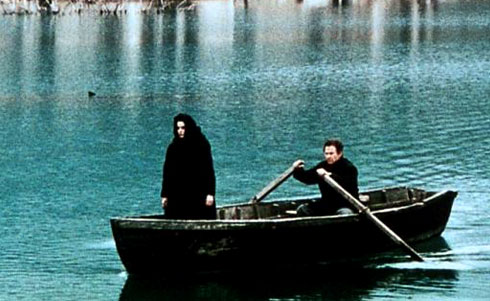 Ulysses’ Gaze (1995), the second of Angelopoulos’ ‘Trilogy of Borders’, stars Harvey Keitel as Greek-American filmmaker ‘A’ returning after exile to screen his latest incendiary work. The director was reportedly livid after losing out on the Palme d’Or (it won the Grand Jury Prize), which sounds disgustingly self-involved but is completely understandable when you watch the film. It’s scope is almost unparallelled and the confidence and control of the frame Angelopoulos possesses is breathtaking.

The other two films collected in this edition, The Weeping Meadow (2004) and The Dust of Time (2008), make up the first two instalments of an uncompleted trilogy. Though both visually distinctive and worthy of every ounce of praise and critical regard that they have received, they cannot help but live in the shadow of the other two films when collected as such. Willem Dafoe, however, is excellent as ‘A’ in The Dust of Time, making the role entirely his own.

These films make a persuasive case for Angelopoulos as an undervalued master of the medium and, though not to everyone’s taste, deserve to find an audience in the wake of the Greek director’s untimely death.

Enter our new Theo Angelopoulos Collection Vol. 3 competition here to be in with a chance of winning one of THREE DVD copies of the box set, courtesy of Artificial Eye.