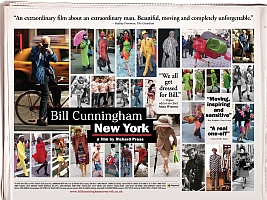 Bill Cunningham is for fashion photography what Spike Jonze is for the music video, with his work continuously interesting and visually innovative. Richard Press 2010 film Bill Cunningham New York documents the much-loved shutterbug brilliantly, but in a fashion as non-invasive as the work of its subject, allowing for a sensitive and heart-warming depiction of a man adored by many in the world of fashion.

Revered a photographer as Cunningham is, you’d be forgiven for thinking that he was some Parisian hipster, but you’d be wrong. Cunningham is an elderly New Yorker with a career spanning decades, and a portfolio that includes the most memorable names in fashion and celebrity culture, and at over 80 years of age he shows no sign of giving up yet.

For decades this bicycle riding, cultural anthropologist has been obsessively and inventively chronicling fashion trends and high society charity soirees for the Style section of The New York Times, in his ‘On the Street’ and ‘Evening Hours’. His omnipresence in the world of New York fashion is summed up by Vogue editrix, Anna Wintour, who states “We all get dressed for Bill.” 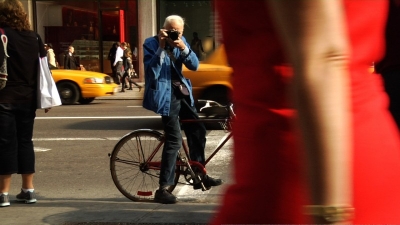 Whilst Bill Cunningham New York is light and shot at some distance from its subject, it is layered with moments of poignancy as the film explores the life of a man whose only wealth is his own humanity and unassuming grace. The shots of Cunningham’s tiny flat, in the Carnegie Hall building are telling: his art comes before all else, yet as the film progresses, we discover a man with strong convictions and spiritual beliefs, and somebody as introspective as his work is expressive.

Bill Cunningham New York isn’t the most powerful of documentaries, but its exploration of the power of art and the polarising impact it can have on an artist’s life is very moving: Cunningham’s life can be seen on the one hand as an inspiration to aspiring artists, yet on the other as a sacrifice, and because of this dichotomy, his story is a genuinely touching one.

The film received awards at the Melbourne, Sydney, Abu Dhabi, Nantucket, and Canberra film festivals and arguably deserved more. Its sensitive portrayal of a man so private but yet so dramatic, and the fine balance offered between poignancy and humour, expressed by Cunningham’s quirky character should be seen as a celebration of him as a true artist.

Bill Cunningham New York is a simply shot documentary, but its subject is anything but plain, as Cunningham oozes the energy of a 21-year-old just starting their career in the hustle and bustle of the big city, and it is because of this wonderful character, that Press’ film is worth the watch.