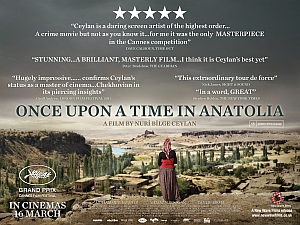 Award-winning Turkish director Nuri Bilge Ceylan has been a Cannes favourite since his debut film Koza won the Palme d’Or for Best Short Film in 1995, so it came as little surprise when his latest film, Once Upon a Time in Anatolia (2011), walked away with Grand Jury Prize at last year’s festival. However, Ceylan’s win is down to far more than simple industry favouritism, and UK audiences will get the chance to savour the director’s latest masterstroke when it is released in select cinemas this Friday.

Starting at dusk and ending around the middle of the next day, Once Upon a Time in Anatolia follows the meticulous (if at times amateurish) investigation into the apparent murder of a local man at the hands of his two friends. Ceylan provides no motive or explanation for this seemingly random killing, instead preferring to focus on the interaction between the assisting Doctor Cemal (Muhammet Uzuner), Clark Gable-lookalike Prosecutor Nusret (Taner Birsel), Commissar Naci (Yilmaz Erdogan) and his band of merry (if clueless) men. 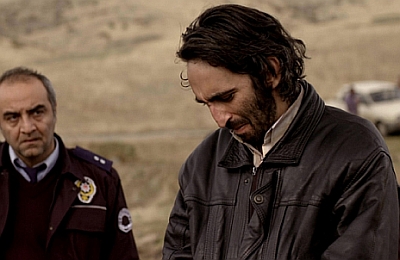 Ceylan’s film is an almost unparallelled mediation on crime and punishment without ever depicting the heinous events that the posse are investigating. The Grand Jury Prize winner’s direction is meticulous yet expansive, revelling in the hugely spacious Anatolion steppes that hides at least one body (if not hundreds) beneath its rolling soil.

Perhaps more surprising is the amount of humour (most of it of the gallows variety) that Ceylan manages to squeeze out of the scenario. A running joke involving Nusret’s resemblance to Clark Gable – even brushing his moustache nonchalantly at the very prospect – provides some genuinely funny light relief that perfectly complement the film’s darker, more serious moments.

Once Upon a Time in Anatolia is not only a superb film in its own right – sitting proudly amongst the best of Ceylan’s substantial body of work – but is also a contender for film of the year so far. Those that can embrace its patient, visually-enthralling style and sparse, yet affecting dialogue will be rewarded with a film of grand ambition, delving deep into the human condition and questioning our very moral fabric. Put simply, Ceylan’s latest is an unmissable cinematic classic-in-the-making.