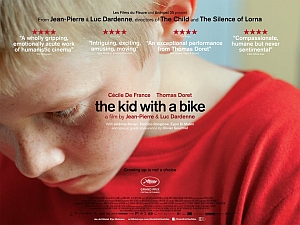 From Belgian directorial duo Jean-Pierre and Luc Dardenne, and featuring an outstanding central performance from 15-year-old newcomer Thomas Doret (just 13 at the time of shooting), new Artificial Eye release The Kid with a Bike (Le gamin au vélo, 2011) is a frank, often heartbreaking story of an 11-year-old foster child struggling to come to terms with his father’s rejection.

The film’s titular ‘kid’ is Cyril Catoul (Doret), a young boy living in the grim Belgian town of Seraing, left in a state-run children’s home for over a month at the bequest of his absent, seemingly uncaring father Guy (Jérémie Renier). After paying an impromptu visit to his father’s now-deserted flat, Cyril is fortunate enough to meet Samantha (Cécile de France), the kindly owner of a local hairdressing salon, who subsequently agrees to let the boy stay with her at weekends. Compelled by his desire to re-locate his father (who coldly sold the boy’s beloved bike before departing), Cyril descends deeper into anger and introversion, with potentially life-changing consequences. 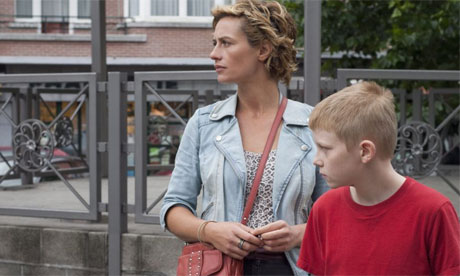 Not since Céline Sciamma’s 2011 effort Tomboy has a young lead drawn the attention quite as much as Doret. From his darting, rodent-like demeanour to his sporadic bouts of aggression (often taking the form of biting), the young actor is an impossibly watchable screen presence from beginning to end, as much frustrating as he is endearing. Amongst the small support cast, Cécile de France is also the ideal Samantha, a flawed, sympathetic ‘Good Samaritan’ that similarly struggles to comprehend the boy’s deep-seeded emotional trauma.

Shot in a lyrical, yet stripped-back style by the Palme d’Or-winning Dardennes, The Kid with a Bike is, like Sciamma’s Tomboy, a nostalgia-free, warts-and-all presentation of life as a child. Central throughout is Cyril’s relationship with his totemic bike, a simultaneous symbol of both the boy’s desire for freedom and – in contrast – his need for paternal acknowledgement. It is the film’s eponymous bike that eventually leads Cyril into the hands of greasy local hoodlum Wes (Egon Di Mateo), setting in motion a series of dramatic events that threaten to separate Samantha and the boy permanently.

Tough, bold and at times (especially for its fragile protagonist) bruising, the Dardennes have once again succeeded in constructing a social commentary that isn’t concerned with investigating bureaucratic constructs and frameworks, preferring instead to focus on the here and now. Consequently, Doret’s superb turn as Cyril may be the closest European cinema has come to finding an Antoine Doinel (the iconic star of François Truffaut’s 1959 classic The 400 Blows) for the 21st century.