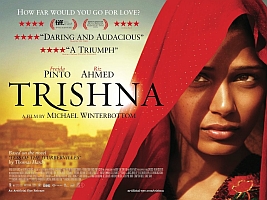 Arguably Britain’s most prolific director, Michael Winterbottom returns to Thomas Hardy territory with Trishna (2011), a retooled version of Tess of the D’Urbervilles. Relocated to present day India and shot in the beautiful rural area of Rajasthan as well as the more familiar Mumbai, Freida Pinto stars as the titular heroine, who lives with her family, scratching a living from occasional jobs at hotels and helping her father deliver produce in his jeep.

When she meets young English business man Jay (Riz Ahmed), her destiny is set on a dramatic and ultimately tragic course. After she is injured in an accident which sees her father badly hurt and the family jeep damaged, Jay at first appears keen to help her, giving her a job in his father’s hotel and helping to alleviate her family’s indigence, but it is obvious that he has his eye on her for more than her skills as a waitress. That said, Jay is not so much the straightforward seducer/rapist of the novel (Alec D’Urberville) as a combination of Alec and the callow religious enthusiast Angel. It is obvious that, as well as lust there is something like love at work as well. Which will prove the more destructive, however, is to be seen. 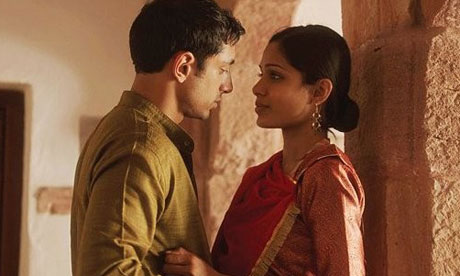 Lifted out of her old world, Trishna finds herself caught between two different social realities: unable and perhaps unwilling to return to her family once she has seen something beyond her horizons and yet without the cunning or the financial independence to strike out on her own and make a place for herself in the frenetic bustle of Mumbai. Unable to survive alone, she is trapped in a relationship with Jay which is increasingly compromised by the dramatically unbalanced financial status and unequal power balance of the two.

Having already shot a more conventional Hardy adaptation in Jude (1996) as well as a Western version of The Mayor of Casterbridge with The Claim (2000), Winterbottom’s sensibilities seem attuned to Hardy’s brand of weary pessimism, as well as sharing an interest in the changing and often hostile world in which his characters are situated. The cast bring an easy naturalistic style to their performances, softening some of the more melodramatic elements of the plot, with Winterbottom’s camera eager to capture the colours, multiple identities and complexities of modern day India. Ahmed is excellent as Jay, a social gadfly, who longs to be more important than he is, but is too easily distracted and bored to fully commit to anything of weight. Veteran actor Roshan Seth has a wonderful cameo as Jay’s father, a self-made man who has cursed his son by giving him an unbeatable example.

However, the success – or otherwise – of Trishna rests squarely on Pinto’s shoulders, appearing in every scene and carrying the dramatic weight of the film. Subsequent to her debut in Danny Boyle’s Slumdog Millionaire (2009), Pinto has appeared in untaxing decorative roles and Julian Schnabel’s awful Miral (2010). Here she is much better, infusing her placid submissiveness with quiet power, but at times she lacks the spark, the independent cussedness that Natasha Kinski provided in Roman Polanski’s Tess (1979).