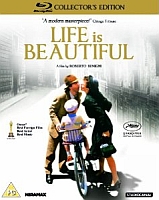 Roberto Benigni’s Life is Beautiful (1997) won three Oscars at the 1999 Academy Awards, including Best Actor for Benigni’s performance and Best Original Score for Nicola Piovani’s sumptuous soundtrack, and achieved the kind of commercial success and international visibility that Italian cinema only sporadically enjoys. Benigni himself already had some fame on the world stage having starred in Jim Jarmusch’s Down by Law (1986) and Night on Earth (1991), as well as a misjudged turn as Inspector Clouseau’s son in the rightly forgotten Son of the Pink Panther (1993).

Guido Orefice (Benigni) is a young carefree Italian Jew, who moves to a town where he works at his uncle’s hotel as a waiter as he dreams of opening a book store and marrying a girl who he has met by chance. Life seems definitely set to be beautiful as his dreams are realised and he starts a family winning the ‘principessa’ of his dreams, Dora, played by Nicholetta Braschi (Benigni’s wife and long time collaborator), away from her aristocratic fiancée. 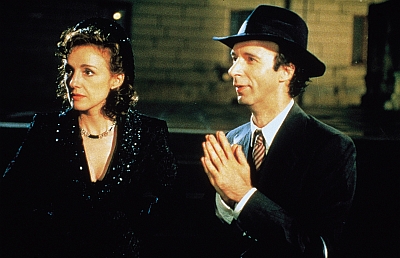 However, a few years down the line, and now with a wife and a young son, Gio, to support and look after, events take a decidedly darker turn, as fascism tightens its grip and wartime Italy begins to ships its Jews to concentration camps. Dora, Guido and Gio are rounded up with the other Jews and sent to a Death camp. In a desperate bid to protect Gio from the horrific reality of what is happening and at the same time help them survive, Guido invents a story that everyone is playing a complicated game, the prize for which will be to win a tank.

Although the film was criticised by some who felt it trivialised the holocaust and who also argued that its central message of lying to protect the innocent is highly problematic to say the least, Benigni himself and his defenders argued the film was a fable, a fairy tale and should be judged as such.

It is undoubtedly Benigni’s performance, and that of the young boy Giorgio Cantarini, which ultimately wins the viewer over as well as Benigni’s obvious sincerity in what he is trying to do. As well as starring and directing, Benigni was also the co-writer of the film, which went on to influence other treatments of the Holocaust such as The Train of Life (1998) and The Boy in the Striped Pyjamas (2008).

Benigni has retained his popularity in his native country partly because of his extensive theatrical work, especially in popularising Dante and for his wonderful acerbic and eagerly awaited attacks on Silvio Berlusconi. However, the Blu-ray collector’s edition rerelease of Life is Beautiful offers a chance to reassess Benigni at his best, just as he is due to appear once more on our screens in Woody Allen’s up-and -coming To Rome With Love (2012).