At the centre of Marchal’s film is the Gang des Lyonnais, the ‘Lyon gang’, a group of ageing bank robbers and mobsters now reaping the rewards of a life of crime. At the head of the gang is Momon Vidal (Gerard Lavin), a muscular Machiavelli who left his gypsy heritage to become one of France’s most notorious bosses. Despite his ruthless streak, beneath Momon’s tough exterior resides the beating heart of a family man, and when his best friend/partner in crime Serge Suttel (Tcheky Karyo) is finally incarcerated after a lengthy police hunt, he vows to come to his aid. However, it soon transpires that the French government may not be the only powerful enemy Serge has made during his colourful career. 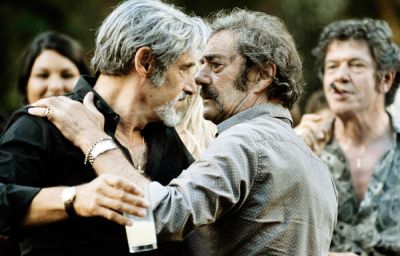 Regardless of its French trappings, A Gang Story is very much The Godfather/Goodfellas re-hashed, albeit with some neat European flourishes courtesy of Marchal. A dual narrative succinctly parallels the present with the past, giving us an insight into the rise of Momon, Serge and the gang whilst drawing inevitably towards its dissolution and ultimate annihilation. In the lead role, Lavin does his best to emulate the great gang bosses of the past (De Niro, Pacino), handling the film’s quieter, reflective moments with admirable ease.

Less impressive, however, is Karyo – though we get a vague sense of Serge as Momon’s impulsive right hand man, he fails to evoke the same feeling of threat and danger that you’d get from a Pesci or Caan. In many ways, this is representative of the film as a whole; whilst undeniably competent, you can’t help but that you’ve seen this rags-to-riches gangster opera played out countless times before.

A Gang Story is an easy film to fall for – it’s slick, proficient and has just enough depth to lift it above your average, humdrum crime drama. However, those looking for a fresh take on the ‘reflective mob boss cleans house’ narrative will struggle to find anything particularly new or incisive.