It’s probably unwise to analyse films like Strippers vs Werewolves (2012) too closely. Peel away the gimmicky editing (which is effective in a naive comic-book way), and what’s left of this British produced horror-comedy from director Jonathan Glendening (responsible for the recent horror release Night Wolf (2012)) lacks any real guts. Starring Robert Englund, Steven Berkoff and newcomer Martin Compston, the presence of such stalwarts is really all that’s of interest in this amateur tale of Lycanthrope activities in London’s clubland.

Sleazy werewolf Mickey (Martin Kemp) is killed by dancer Justice (Adele Silva) after becoming a little too aroused during a private performance at Vixens, an exotic London strip club. Trying to cover up the incident, Justice’s boss Jeanette (Sarah Douglas) has Mickey’s body disposed off and attempts to carry on business as usual. However, it quickly becomes apparent that Mickey was involved with some very nasty friends who are now out to avenge him, leading to the inevitably gory showdown during the next full moon. 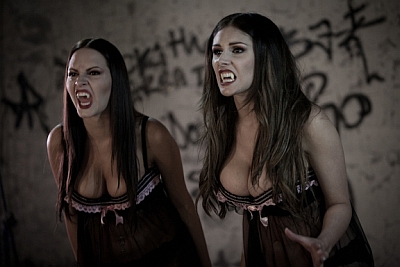 There has really only ever been one classic modern British-based werewolf film aside from An American Werewolf in London (1981) – an American production. After Neil Jordan’s sublime masterpiece The Company of Wolves (1984) broke the mould, frankly no-one should have tried resuscitating this pretty much lifeless area of horror – particularly not the team behind the limp Strippers vs Werewolves.

Apart from the presence of the aforementioned Englund (surely he isn’t so hard-up as to have to reduce himself to a two minute cameo in such drivel as this), the only other good thing in the film is its admittedly witty script (“I’m going to kill you so slowly that you’re driving licence will expire before you do”). Unfortunately though, such gems are so diluted by copious unimaginative expletives that they lose much of their potential impact.

During an explosive climax, Sinclair (played by Simon Phillips) gives a tongue-in-cheek nod towards 2004 turkey Van Helsing, exclaiming “Oh my god, that was the greatest thing I’ve ever seen. More people should have seen that”. We think not – on both counts.