Film Review: ‘To Rome with Love’

Having outstayed his welcome in London before a brief and pleasant sojourn in Paris, Woody Allen continues his European tour, this time landing in Rome with a heavy (handed) bump courtesy of latest release To Rome with Love (2012). Any hope of seeing a sustained return to form is thwarted almost immediately by the opening music – ‘Volare’ – and sadly the rest of this cliché-ridden ride is both slow and doddery, with only sporadic sunbursts of Allen’s trademark wisecracking irony.

So, to the story, or rather stories. Firstly, we have young American tourist Hayley (Alison Pill), who falls in love with the dashing Michelangelo (Flavio Parenti), an earnest socialist lawyer. They want to marry; the parents meet. Enter Jerry and Phyllis (Allen and Judy Davis) – he a retired avant-garde opera director, she a psychiatrist. Adversely, Michelangelo’s mamma is a swarthy housewife and his dad a funeral director Giancarlo (Fabio Armiliato). Jokes about analysis and death abound, much to the audience’s pleasure and profound relief.

Also visiting Rome is John Foy (Alec Baldwin), a successful architect famous for designing shopping malls. Foy used to live in Rome and wants to lap up the atmosphere, abandoning his group and running into Jack (Jesse Eisenberg), a young architect who lives in John’s old stomping ground. John acts as Jack’s conscience and sage, offering advice and pearls of hard-won wisdom to the young man, who has fallen madly in love with his girlfriend Sally’s (Greta Gerwig) best friend, Monica (Ellen Page). 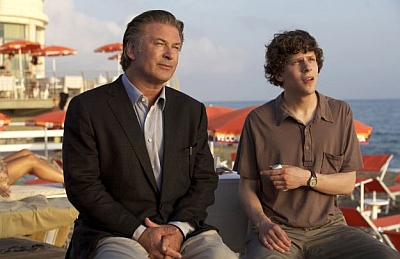 The remaining two storylines involve young country mice Antonio and Milly (Alessandro Tiberi and Alessandra Mastronardi), offered the opportunity to come and live in the big city. Milly gets hopelessly lost before finding herself on a film set, whilst Antonio is caught in a compromising position with a prostitute, Anna (Penélope Cruz). Finally, there’s Roberto Benigni, Italy’s most beloved clown, as a Roman office employee randomly chosen by the media to have fame foisted upon him. Predictably, he hates the attention when he is in the spotlight, but craves it when it’s gone.

Benigni’s storyline holds true for the majority of those found in To Rome with Love. The characters are drawn to unpredictable situations and dalliances with danger (whether fame or forbidden trysts) only to choose the safer option with a wistful glance at what could have been. But just what is Allen trying to do with his latest effort? Is he pondering the meaning of fame and society’s obsession with celebrity? Should we just focus on the love stories, because this is, after all, a rom-com – Allen’s acerbic one-liners notwithstanding?

The truth is, we never really care about any of the youthful characters as they are entrenched in a series of storylines that lack truth. Whilst not expecting gritty realism, we still want characters we can believe in. To Rome with Love, like Allen’s Jerry, lacks backbone. It also lacks a scrupulous editor and a decent script. The Italian contingent contains knife-wielding housewives, whore-mongers and sexy secretaries, which – given the recent shenanigans of its erstwhile leader – is unsurprising, yet still disappointing.

Whilst certainly nowhere near as stereotype-laden as Sofia Coppola’s Somewhere (2010), and despite depicting Rome in glowing hues, Allen’s latest is full of missed opportunities and loose threads. Allen himself has said that he wanted to pay tribute to the Italian movies of his youth, but alas, Roman Holiday (1953) this certainly isn’t; and alack for Allen fans, it isn’t Husbands and Wives (1992) either.