Na-Mi spends her days doing housework and staring at her ageing face and tired hands with immense sadness. Just like the sound-proof blender box blocks all noise, so does life in Na-Mi’s home – the breakfast table is wrapped in silence, and as her husband leaves for work and her daughter for school, Na-Mi is left in solitude, staring through the window at a group of schoolgirls, and accompanying that lingering longing stare is Cyndi Lauper’s Time After Time. 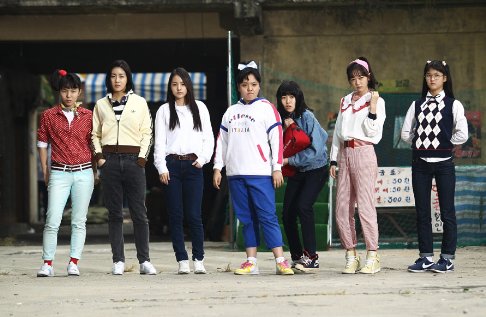 The 1980s is exactly where Na-Mi’s journey through memories takes her. After a chance meeting with her school friend Choon-hwa (Hee-kyung Jin), one request sends them both in search of the five other members of the school gang ‘Sunny’ who, despite their promise to always stay together, became a victim of life, inevitably splitting apart. As the members start coming back together one by one, old stories become revealed through colourful humorous flashbacks of the girls’ school-days, and it begins to appear that life didn’t turn out quite as any of them were expecting.

Kang takes the audience on a journey of nostalgia; of a time more peaceful even when violent; more beautiful even when ugly; simpler even when complicated. Accompanied by a wonderful soundtrack of 80s European pop, Sunny represents a nostalgic journey into ‘the best days of our lives’, when worlds were there to be conquered and life was there to be lived to the fullest.

At its centre, Sunny is a moralising take on the value of friendship, which transcends the boundaries of time and space. Yet it is also a story about the wide, at times seemingly non-existent gap between generations. As Na-Mi’s daughter runs out of the house late for school without her breakfast, Kang spins time around and bring us back to the years that Na-Mi used to run out without having time to eat. Through those little manoeuvres, Kang’s skilful direction succeeds in convincing that the unsteady nature of everything in life has a sense of equilibrium in the end.

A fine example of contemporary popular South Korean cinema, Kang’s Sunny smashed box office records in South Korea, striking a chord with its mix of knowing nostalgia and contemporary social critique – all fizzing along to a classic 80s soundtrack.