Ho-Cheung Pang’s Vulgaria (2012), which had its European Premiere during a packed midnight screening at the 14th Udine Far East Film Festival, stars Chapman To as fictional film producer Wai-Cheung To. From his blunt and coarse comparison of the role of a film producer to the function of pubic hair, to his phenomenal story of self-sacrifice in an attempt to secure funding for his hit film Confessions of Two Concubines, To conceals nothing and often drifts into crude, offensive detail regarding his streak of misfortunes.

Throughout, Vulgaria is ridiculous, rude, and, well – vulgar. Although most references and jokes are transferable to western audiences, it’s the Hong Kong-specific humour that make Vulgaria particularly vulgar and politically incorrect. The Guangdong dialect and slang, the peculiar repugnant dishes – most of which being from the real Cantonese cuisine – and other geographical and cultural particularities, as well as the absurd linguistic misunderstandings, add a spicy flare to this localised production and contribute towards its insolent humour and politically incorrect audaciousness. 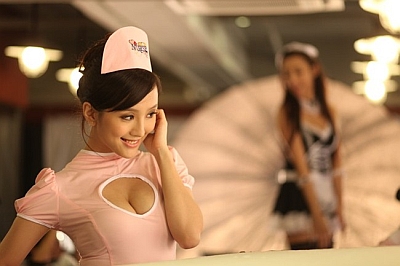 This industry commentary makes for a life-like production, light years away from the romantic, sugar-coated comedy of Pang’s commercial efforts Love in a Puff (2010) and Love in the Buff (2012). Instead, Vulgaria is spectacularly frantic, fearless and frivolously raw, and an utterly sincere and uncooked production which will probably never see a release in the mainland. Vulgaria is a cheap, frank and spontaneous extravaganza of brutality and crudeness – a quality production providing a solid level of improper humour, designed to trouble audiences with its discomforting nature and ultimately force them to abandon their conscious constraints.